NIA CHARLESTOWN NEVIS (June 25, 2013) — The Nevis public and visitors to the island, will soon have access to an area reserved for recreational activities and beach vending in close proximity to the Pinneys Beach. 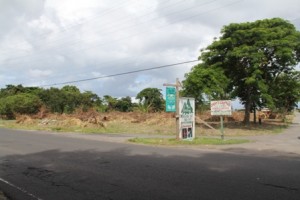 Assistant Secretary in the Ministry of Tourism in the Nevis Island Administration (NIA) Mr. Carl Williams told the Department of Information that work has already commenced on 14 acres of land, just north of Charlestown from the Island Main Road bordering the beach, some of which is already home to the island’s popular beach bars including Sunshines, Chevy’s, Lime and Double Deuce.

“We are looking at a 14 acre plot of land that has been earmarked for development. It will be shortly called the Pinneys Beach Recreation and Public Park. This area was earmarked some time ago for public use. However, the time is right for us to get it going.

“It is in very close proximity to the famous Pinneys Beach. When it is finished, we will have a total of 14 new vending booths which will be available for lease by persons who wish to do some beach vending. There will also be a five acre plot of land which will be for public use where one can come picnicking. All of this is aimed at improving the tourism product of the island,” he said.

The project which is expected to be completed by the upcoming Tourist Season has been undertaken collaboratively with other government entities including the Ministry of Physical Planning, the Department of Agriculture and the Housing and Land Development Corporation. Work commenced two weeks ago but had been hampered by mechanical problems and the weather. However, the land was expected to be cleared by the coming weekend.

Mr. Williams also spoke to the added beautification efforts planned for the area and explained that they would seek to replant coconut trees which once adorned the area.

“One of the areas we would be looking at is the replanting of coconut trees and some palms to add some beauty to the area. We are aware that once ago Pinneys was renowned for its coconut trees and we want to revive that tradition…

This area should be cleared at the end of this week then we will have some assistance from corporate citizens to have it grassed as well and then the development will start in earnest,” he said.

However, Mr. Williams made it clear that the project also included an element of conservation.

“We have left quite a number of the large trees because we do want a green space and these trees are very old and they add some beauty to the area. Some of them also have wildlife nesting for birds etc. and so we try as much as possible not to destroy these unlike the shrubs, even though they are useful, we can do without them on these site and we have removed those,” he said.

In response to whether there was any interest in the booths for lease, Mr. Williams responded in the affirmative but urged other persons who wished to do so to send in their applications.

“So far we have got about five applications for the 12 huts or the booths we are hoping to lease and so, we are encouraging those persons who are interested to apply, send their letters to the Ministry of Tourism at Bath Hotel so that they can be a part of this development,” he said.

The Assistant Secretary also expressed hope that the new beach vendors would bring new flair to the popular beach and offer unique products and craft to beach goers, visitors and other members of the public.
END

Criminal Investigation Department to Benefit from Donation of Laptops from Social…