NIA CHARLESTOWN NEVIS (July 16, 2013) — The Nevis Historical and Conservation Society (NHCS) issued a call for volunteers whose expertise could help explore the possibility of nominating the historic section of Charlestown as a United Nations Educational Scientific and Cultural Organization (UNESCO) World Heritage Site. 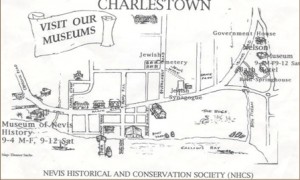 The call came recently from Executive Director of the Nevis Historical and Conservation Society (NHCS) Mrs. Evelyn Henville based on a request made to the Society by Deputy Premier and Minister of Tourism on Nevis Hon. Mark Brantley to explore the possibility of Nevis joining other islands in the Caribbean and the world who have protected their heritage sites with UNESCO’s help.

“The UNESCO World Heritage List is designed to preserve and protect the cultural and natural heritage of sites throughout the world. There are currently 981 sites on the list including several in the Caribbean: Brimstone Hill Fortress National Park in St. Kitts, Historic Area of Willemstad in Curacao, Historic Bridgetown and its Garrison in Barbados; Morne Trois Pitons National Park in Dominica; Pitons Management Area in St. Lucia; LaFortaleza and San Juan National Historic Site in Puerto Rico; plus nine in Cuba and one in the Dominican Republic.

“Volunteers with interest and expertise in this area should contact Evelyn Henville, NHCS Executive Director, at 469-5786 or evelyn53@aol.com. A meeting is being planned for September 2013 to discuss this matter with the general public. The date, time and location will be announced soon… A nomination would be the key part of recommendations being developed by the NHCS on how to protect Charlestown’s architectural history and heritage as part of a new economic development strategy to revitalize the downtown area,” she said.

Mrs. Henville told the Department of Information on July 16, 2013, that if Historic Charlestown is recognized as a World Heritage Site, the island’s tourism product would benefit.

“If the nomination is accepted by UNESCO, Nevis would benefit in the area of tourism. The island would be in a different category with respect to tourism; it would increase visitors; it would increase awareness of the island, its people, its culture and Non-Governmental Organisations and it would increase the possibility of funding for heritage and cultural matters,” she said.

The NHCS Executive Director further explained that in recent years Charlestown had experienced a number of changes. Some buildings had been replaced and others altered however, many of its buildings were authentic and the ancient street patterns gave the town its unique form and character.

She explained that as part of the nomination process, it would be necessary to designate an “historic district” in the capital city.

“As part of the nomination process, it would be necessary to designate an “historic district” in the capital city with a management plan to protect the designated area and buildings located in that area. Guidelines would need to be written and a review board, to consider all proposed changes in the historic district would need to be part of the process,” Mrs. Henville said.

Apart from seeking to have Charlestown listed as a World Heritage site, the NHCS was also embarking on other measures that would enhance Charlestown’s potential for heritage tourism such as the “Main Street” programmes adopted by successful small towns and cities in the United States of America and the United Kingdom.

That approach, the Society contended, would build on the unique character of the town and include not only beautification but economic restructuring activities and aggressive promotion.

Meantime, a property owner in Charlestown who spoke to the Department of Information on 16th July, 2013 on condition of anonymity, said that she had no issue with the intentions of the NHCS and the Ministry of Tourism’s plans to nominate Historic Charlestown for the UNESCO World Heritage List.

“The Planning Division has always insisted that property owners within Charlestown maintain the authenticity of the buildings when considering repairs. So it is nothing new to us and if it means putting Nevis on the tourism map then why not!” she said.
END