“Operation Meet and Greet” is a community engagement initiative of the Charlestown Police Station that provides an opportunity for the officers and are residents to meet and share their concerns with regards to community safety. The interaction between the Police and the residents, takes place on the streets, in village shops, in neighbourhood bars, community sporting venues and in house to house visits.

The goal of the initiative is to strengthen the relationship between the Police and the communities they serve and is in keeping with the Police Six Point Plan for the Reduction of Violent Crimes in communities and the Four Year Police Strategic Plan.

Inspector Conrad Bertie of the Charlestown Zone noted, “the officers have been out in the communities and will continue until we have visited every residential area in the patrol zone.” He said, “the officers have spoken to a number of residents of the various areas who are very happy to see the presence of the Police in the area.” He added, “residents were not shy in sharing their concerns, they have expressed their concern about the poor street lighting that exist in some areas of villages and the over grown vegetation on unoccupied properties”. Inspector Bertie added, “these concerns were noted and the relevant persons and or departments will be contacted to address them with the goal of making our communities safer and reducing the fear of crime for our residents.”

Inspector Bertie observed “the younger officers are enjoying the interaction with the residents; they are really getting to know the communities they serve by being on the ground.” 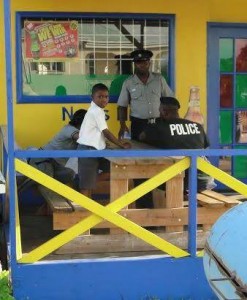