Heroes Park, St.Kitts (September 21st 2015):-St.Kitts-Nevis’ Team UNITY Administration have been staying true to their promise to pursue a FRESH START which includes a much more inclusive, unified and less politically divisive St.Kitts-Nevis. In another unprecedented move the 7 Month Old administration invited and accommodated the Leader of the Opposition at the annual government organized national hero’s day ceremony at the Heroes Park in the Village of St.Pauls.

Leader of the Opposition Dr. Denzil DOUGLAS joined other dignitaries including the Governor General, the Prime Minister, the commanders of the armed forces, foreign dignitaries, family members of Sir Robert Bradshaw, a representative of the St. Kitts and Nevis Labor Union, in the ceremonial and symbolic laying of the wreath at the base of the statue for the country’s first National Hero the Right Excellency Robert Llewellyn Bradshaw.

In addressing the ceremony Prime Minister Dr. Timothy Harris said “A country and its people require its heroes not only to provide the exemplars for the society but as a constant reminder of the values, virtues, and the quality of work and vision that made our nation great.

It is right that we honor our Heroes who have contributed so meaningfully to our National development.”

Wednesday’s Hero’s Day observance was presided over by the Governor General His Excellency S.W Tapley Seaton

We are committed to Restoring Democracy and Promoting Prosperity in St. Kitts and Nevis. We invite you to join our cause. 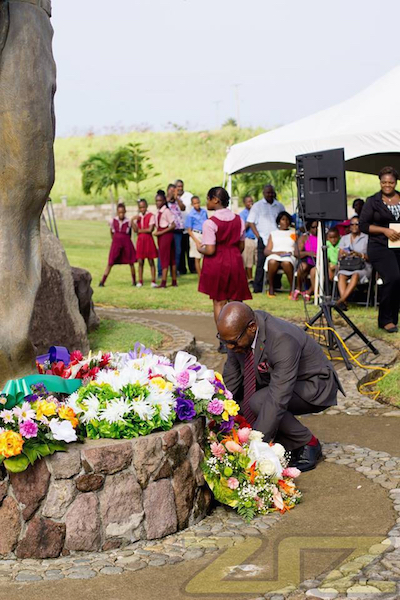