Charlestown, Nevis (June 12, 2014) — June is observed as the Early Childhood Month in the Federation of St. Kitts and Nevis. This year marks the 30th anniversary of the observance, and is being celebrated under the theme ‘Child Month @ 30 Celebrating our Achievements’. 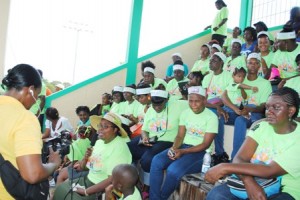 The island of Nevis holds its Child Month Parade early in the month, while the island of St. Kitts holds its parade towards the end of the month. According to officials at the Early Childhood Unit, this is to allow delegations from each island to participate in the parade on the other island.

Nevis held the parade on Friday June 6 with the traditional walk snaking its way from the Old Hospital Road to the Grell-Hull Stevens Netball Complex in Stoney Grove. It was as colourful as has been the tradition, but this year’s parade saw the entry of new players in the sector.

For many years Mrs Vanta Walters was the director of Early Childhood in St. Kitts and Nevis and she cut a larger than life image, as the unit was associated with her.

Upon her retirement in 2010, an equally dynamic person in the name of Mrs Jacqueline Morris took over and many thought it was the last they would be hearing of, or even seeing, Mrs Walters as it related to Early Childhood activities. They were wrong.

Mrs Walters is back and with a bang. When the Project Manager of the People Employment Programme (PEP) Mr Geoffrey Hanley felt the need to have early childhood practitioners trained before they set foot in an early childhood entity, he called from retirement Mrs Walters to set up an Early Childhood Training Programme.

Appreciating the needs of the nation, Mrs Walters agreed to come out of retirement and for the past one year she has been conducting an Early Childhood Programme for 21 trainees, at the Challengers Community Centre. The programme and the trainees are fully sponsored by the People Employment Programme.

The trainees joined scores of Kittitians who journeyed to Nevis last Friday morning for the Child Month Parade. While all wore a colourful light green T-shirt, the PEP Early Childhood trainees stood out as they in addition wore a headpiece that distinguished them from the others, and were indeed the centre of attraction.

“The reason for wearing that headpiece is that the scores of persons who went over they were all dressed in the official T-shirt for celebration of the 30th anniversary of Child Month,” observed Mrs Walters. “We wanted to identify the PEP group so others can see that they were from a special group, the PEP Early Childhood group.

“So on their heads they wore the headpiece, which was like a costume headpiece, with the letters ‘P.E.P. – E.C.D.’ (People Employment Programme – Early Childhood Development) to the front and the word ‘St. Kitts’ to the back. I wanted the audience to see that we have come over from St. Kitts to stand in solidarity with the Early Childhood section in Nevis.”

The elegantly dressed PEP Early Childhood Development trainees caught the attention Ms Judith Dasent, a producer with the Nevis Television (NTV), who interviewed them while they were at the Grell-Hull Stevens Netball Complex where they said that they enjoyed joining their counterparts on Nevis.

“It was a very good day for the ladies in the PEP ECD training programme,” observed Mrs Walters. “They had an opportunity to work a long side those who are actually in the profession already. They got firsthand experience of helping to take care of the children, going on to and from field trips.

“They participated in the Nevis parade, and when I spoke to them as individuals, they all expressed how grateful they were, how happy they were and how special they felt. It seems to me it has boosted their morale, boosted their self esteem to think that even though they are not yet officially working in the field in a private centre or a government centre, or even having their own centre, they felt a sense of belonging.”

According to Mrs Walters, they felt as if they were already a part of the whole Early Childhood profession and that boosted them. As a result of that exposure, she has a feeling that it will help them to even do better in the months that lie ahead, as they were very motivated on that day.

“I just want to register my gratitude to the Education Officer for Early Childhood in Nevis, Mrs Florence Smithen, for agreeing to accommodate us in the parade,” said Mrs Walters. “As a matter of fact she was delighted when I told her my intention to bring with me the girls and I was able to give her the number and she was very happy to provide lunch for us.

“She also gave us a prominent place in the parade. We were actually leading the parade along with the Early Childhood staff and the ministers of government and whoever else was in front. We were a part of the group that led the parade.”