BASSETERRE, ST. KITTS, APRIL 18TH 2013 (CUOPM) – Declaring that his St. Kitts-Nevis Labour Government is clearly “a government of the people,” Prime Minister the Rt. Hon. Dr. Denzil L. Douglas told a mammoth political meeting in Old Road on Sunday that “this is a government that is looking after the interests of the people.” 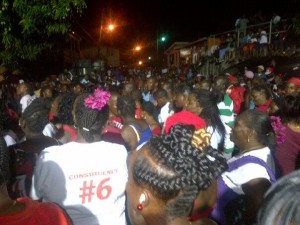 He reminded the crowd that his Labour Government is not like the previous PAM government “where only the PAM trumps are benefiting from their government for 15 years.”

“I want to make it clear that you understand that the government now that it has settled a lot of the challenges that it faced and you have seen these challenges settled from the presentation of the budget,” said Dr. Douglas.

He said the Cabinet, which is now united, is now going to move into the second phase of the development of St. Kitts and Nevis.

“We want to make sure that the lands that we have identified will now be developed for the interest of the people of St. Kitts and Nevis. We want to make sure that agriculture emerges as a serious productive sector in this new economy, so that our small farmers can be empowered and our people will not become totally dependent upon tourism and hospitality, but will twin that with agriculture and move our great country forward,” the Prime Minister said.

“It is not only in land development but also in the expansion and in the continued improvement of healthcare. We want to twin health services and medical services with tourism. We want to have health-tourism established in our country, where not only our people will benefit from an improvement in the quality of service in the health sector, but we will be able to invite foreigners to come here to have specialised surgery performed on them filling our hotels and providing necessary employment for our people,” the Prime Minister said.

“We want to make sure that we continue to invest in this new phase in our human capital. More students need to go off to universities and colleges and to move this country forward,” said Dr. Douglas.

“We want to make sure that the small sector business becomes an integral part of moving the economy of St. Kitts and Nevis forward. Small and medium-size entrepreneurs need to be empowered, not just the big businesses being given the opportunity to expand in the hotel plant; but we want to make sure that small and medium size entrepreneurs are supported and given the way forward by your government,” he said.

“Comrades we want to make sure that we provide a quality of life for our people in a way that we have never seen before. And that is why I say to you; don’t mind our two former comrades have gone to the other side. It has been a long time that they have been planning to go to that side. If you can recall all the talk that there was about the Beacon Heights Project. Every attack was placed on Douglas, but you know who the Minister in charge was for Social Security and that project? Sam Condor. He was already in the arms of PAM and that is why no one attacked him; because he had already betrayed this great party the St. Kitts and Nevis Labour Party,” said the Prime Minister who is also the National Political Leader of the governing St. Kitts-Nevis Labour Party.

“I say to you the great people of our country, that you must make sure that you do not relax your efforts from here onwards. You must always defend your government. You must defend your party with full confidence.