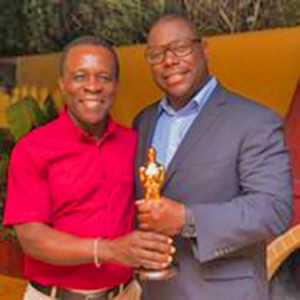 Prime Minister Mitchell personally congratulated the Oscar winning director during a reception in St.George’s on Saturday.

McQueen visited Grenada, accompanied by his Mom, after winning the 2014 Oscar for his film “12 Years a Slave.”

Prime Minister Mitchell congratulated McQueen and encouraged him to continue to perform at the highest level.

Otway-Noel also extended best wishes to McQueen, and thanked him for his very public remarks on his Grenadian roots being influential in his work.

The Oscar winner expressed to the Prime Minister that he will promote Grenada in any way he can, because it is a place “that informs much of his work, and is very dear to him.”

McQueen, the son of Grenadian parents was on island for three days, filming short scenes for an un-related work.

His accomplishment was also praised in a government statement released hours after he won the Oscar.