President of ROC (Taiwan) to be Conferred with Highest Honour From St. Kitts and Nevis 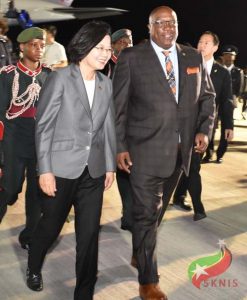 Basseterre, St. Kitts, July 14, 2019 (SKNIS): President of the ROC, Her Excellency (H.E.) Dr. Tsai Ing-wen, will, on Monday, July 15 receive the Order of St. Christopher and Nevis, the highest honour St. Kitts and Nevis bestows on a non-national.

The statement was made by Prime Minister Dr. the Honourable Timothy Harris during a dinner hosted by him at the Park Hyatt St. Kitts.

“Your Excellency, as a token of our highest esteem for you and for the government of the Republic of China (Taiwan), we are delighted to confer on you… the Order of St. Christopher and Nevis – a very special declaration set out in the National Honours Amendment Act, 2005 – which has been conferred on your predecessors Chen and Ma,” said Prime Minister Harris.

The announcement came shortly after the signing of an Agreement on Cooperation in Technical and Vocational Education and Training (TVET) between the Governments of St. Kitts and Nevis and the Republic of China (ROC) (Taiwan), which is aimed at assisting St. Kitts and Nevis with cultivating vocational education teachers, establishing a comprehensive vocational education system, and providing high school graduates with professional skills.

Prime Minister Harris used the occasion to applaud the president on her leadership to date.

“I want to commend the astute and outstanding leadership of President Tsai, the first elected female to the Office of Presidency of the Republic of China (Taiwan). Her firm and competent leadership has been an example to, and Taiwan has grown in strength and stature internationally as a result of the quality of diplomacy being pursued by her and her government” said Dr. Harris.

President Tsai will receive the medal at a ceremony at Government House.