Prime Minister Dr the Hon Timothy Harris took time out of his busy schedule to visit a number of families suffering from the loss of loved ones as a result of crime. 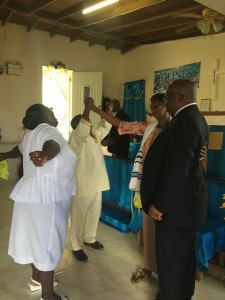 On Easter Sunday, Dr Harris joined the congregation at the Covenant Outreach Church at Phillips’ Village in soulful prayer on behalf of Paulette Jarvis whose son, Devon Jarvis, has been mysteriously missing for days.

Following the service, Dr Harris journeyed to Cayon where he consoled Jennifer O’Loughlin who lost her son, Lanzelle O’Loughlin, to gun violence. He also visited Venetta Duncan, the grandmother of Tyrique Duncan in Spooners. Tyrique was found dead on March 10th, after he was reported missing on March 06, 2016.

On Monday, March 28th, Prime Minister Harris journeyed to St Pauls where he visited the family of Javier Caines, former Fire Officer, who was fatally shot.

The Prime Minister said after Sunday’s church service that he felt moved to let those mothers and families know that our beloved country stands with them as they mourn. Prime Minister Harris added that he and his Government intend to fight diligently for justice for all.

Prime Minister Harris said that, “Families are still finding it difficult to cope. Given the violent and brutal nature of these killings, it is not surprising. I want to appeal to the community and employers to be lenient and supportive of victims of crime and gun violence, and provide sufficient support for these persons to mourn and grieve properly.”

The Prime Minister added: “I feel for the families and I pray for God’s intervention and mercy on them all.”

Hurricane Sam to remain a major hurricane for days, no threat to the U.S.