Basseterre, St. Kitts, March 22, 2019 (SKNIS): As part of his Caribbean tour of six independent countries and one British Overseas Territory, His Royal Highness, Prince of Wales (Charles Philip Arthur George) visited the Brimstone Hill Fortress National Park today, March 21, returning after his last visit some 46 years ago to be greeted by pelting rain and fog. 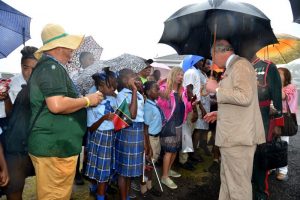 The Royal Tour started in Saint Lucia on March 17 then moved to Barbados on March 19, followed by St. Vincent and the Grenadines on March 20 and Grenada on the 23rd. On 24th March Their Royal Highnesses will visit Cuba and the tour culminates in the Cayman Islands on March 27th.

The Brimstone Hill Fortress National Park was made a UNESCO World Heritage Site of historical, cultural and architectural significance in 1999 and is a monument to the ingenuity of the British military engineers who designed it and to the skill, strength and endurance of the African slaves who built and maintained it. It is one of the best-preserved fortifications in the Americas.

Despite inclement weather, scores of visitors and children from various primary schools throughout the island greeted His Royal Highness at the Fortress.

At the fortress, His Royal Highness unveiled a plaque with the following dates 1794, 1973 and 2019. The Queen’s Canopy was also placed in a permanent position at heritage site.

A plaque presentation of the Queen’s Commonwealth Canopy, a project dedicated to the protection of indigenous forests above 1000 feet, was presented to His Royal Highness Prince Harry by His Excellency the Governor General Sir Tapley and unveiled by Prince Harry on November 23, 2016. The Queen’s Commonwealth Canopy project was launched in 2015 when an appeal was made to all 53 Commonwealth nations to contribute areas of indigenous forest to be preserved in perpetuity to mark Her Majesty’s lifetime of service to the Commonwealth.

His Royal Highness the Prince of Wales was also entertained by the local masquerade group and then his delegation left Brimstone Hill to travel onwards to Government House for a reception and special meeting with Prime Minister Dr. the Honourable Timothy Harris before he and his wife The Duchess of Cornwall bade farewell to St. Kitts and Nevis.