Sargassum, sargassum; this phenomenon could be a new normal 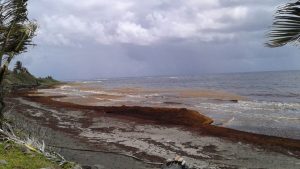 Basseterre, St Kitts, July 13, 2019 – Friday, with my youngest son and eldest granddaughter, and two friends, we made an island tour of St Kitts.
As can be seen from the photos sargassum is everywhere. We took photos of the floating mats of seaweed in the waters and dumped at Pogson Bay (between Parsons and Saddlers) North Friar’s Bay, North Frigate Bay,
On July 9, 2019, NBC News in a article penned by Jaclyn Jeffrey-Wilensky and David Freeman, reported that with help from a pair of NASA satellites, scientists have identified what’s being called the biggest patch of seaweed ever seen. The vast mat of brown Sargassum algae extends all the way across the Atlantic Ocean — a distance of about 5,500 miles — and the researchers say the so-called bloom may represent the “new normal” for parts of the Atlantic. 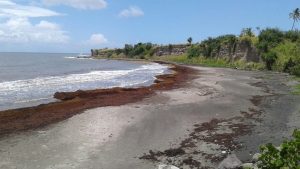 “It goes all the way from West Africa, through the central Atlantic, towards the Caribbean Sea and reaching the Gulf of Mexico,” said Mengqiu Wang, a postdoctoral researcher at the University of Southern Florida in Tampa and co-author of a paper describing the seaweed patch published July 5 in the journal Science.
Floating mats of seaweed in the Atlantic are nothing new; Christopher Columbus reported seeing Sargassum as far back as the 15th century, the researchers say in their paper. And in the open ocean, the tangles of seaweed make a cozy home for sea turtles, crabs, fish and other sea creatures.
But a mat this huge — the whole mass was estimated in 2018 to weigh more than 20 million tons — can cause some pretty big problems. Its sheer bulk chokes corals and seagrasses, traps turtles and turns beaches into a fetid mess. And 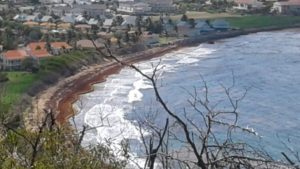 as it decays, the seaweed attracts insects and produces hydrogen sulfide, the gas that gives rotten eggs their sulfurous smell and which can cause breathing problems for beachgoers and boaters with asthma.
This summer, large clumps of Sargassum have accumulated on beaches in Florida and Mexico. Last year, they overwhelmed Caribbean beaches, prompting the government of Barbados to declare a national emergency. “It’s a good thing in open water, but a bad thing for the coast,” Wang said of the seaweed.
Wang and her collaborators at the University of South Florida, the Florida Atlantic University and the Georgia Institute of Technology identified the mat using 19 years of data from NASA’s Earth-orbiting Terra and Aqua satellites. Prior to 2011, the seaweed was mostly limited to the Gulf of Mexico and the Sargasso Sea, an aptly named section of the Atlantic separated by ocean currents. But In 2011, the bloom extended into the central Atlantic. By 2015, it stretched all the way across the Atlantic.
Using data on ocean conditions from the same time period, the scientists tentatively linked the growth of the patch to rising levels of nutrients in seawater — including lots of nitrogen and phosphorous associated with deforestation and the rising use of fertilizers in Brazil. The chemicals have been seeping into the Amazon River, which then dumps them into the Atlantic.
In May, loggers chopped down trees across a record-breaking 739 square kilometers (more than 285 square miles) of once forested land in Brazil, the Guardian reported. “As people cut down more trees, when precipitation occurs, more nutrients can be washed off into the river,” Wang said. “And when rain washes up on the land, fertilizers can potentially leech into the water itself.”
But Kathleen Sullivan Sealey, a biologist at the University of Miami, said there could be other explanations for the growth of the seaweed patch. “The controversy is, is all the Sargassum just drifting down [from the Sargasso Sea], or is there more of it?” she said, adding that more research would be needed to prove the connection between the influx of nutrients and the Sargassum bloom.
Wang agreed that there’s more to learn about the Sargassum surge. She said she’d like to study the effects of ocean temperatures and salinity on the seasonal seaweed blooms. “Only when we have more understanding of these topics can we further understand the phenomenon of Sargassum growth,” she said. In the meantime, the Sargassum bloom may be here for the long haul. “If those processes are not stopped,” Wang said of the deforestation and fertilizer use, “this kind of situation is likely to continue. This phenomenon could be a new normal.”