Basseterre, St. Kitts, Thursday 4th April, 2013, – The leaders of the opposition People’s Action Movement, (PAM), and other parliamentarians that do not support the government of Prime Minister Dr. Denzil Douglas, have taken court action to help force the administration and the Speaker of the National Assembly, to institute measures to have a Motion of No Confidence tabled in the country’s parliament, without further delay. 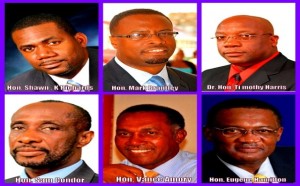 In their notice of application to the court, the opposition members have argued that the members of Government (the Defendants) have failed to schedule the Motion of No Confidence for debate in the National Assembly within a reasonable time or at all.

The six opposition members (the Claimants) are arguing that they are entitled as of right, as implied from section 52(6) of the Constitution of St. Kitts and Nevis, to bring and to move a Motion of No Confidence in the Government of St Kitts and Nevis.

It is their further contention that a Motion of No Confidence must be scheduled for debate as matter of urgency and within a reasonable time of the date on which the Motion was sent to the Clerk. They have indicated that the continued delay is an infringement of their right.

The Claimants are of the view and fear that The Defendants will continue to unfairly introduce legislation other than the Motion of No Confidence for debate and passage in the National Assembly, in frustration of the democratic process, even though more than 113 days (as of 4th April), have passed since the Motion was submitted to the Clerk of the Parliament.

The six, who have already written to the Governor General to indicate that they will vote for the motion and that they do not support the Administration of Dr. Douglas, said they are aware that the Government will further seek to delay the debate of the said Motion of No Confidence which was submitted to the Clerk of the Parliament on 11 December 2012. They have cited the recent decision of the Government to convene parliament for the special session of the Budget which is set down for 9 April 2013 which was postponed from the same 11 December 2013.

Of greater concern however, is the belief that the Government, whether by themselves, or their servants, or agents, or by the Clerk to the Assembly, will expeditiously try to schedule other business, other than the Budget, to be dealt with by the Assembly before the debate on the said Motion of No Confidence, thus further denying the Claimants their right to challenge the Government and the Prime Minister, in a Motion of No Confidence, as a matter of urgency and within a reasonable time of the motion being handed to the Clerk.

The High Court is therefore being requested to place an interim order restraining the Government, from scheduling any business of the Assembly, other than the Budget, to be dealt with by the Assembly before the debate on the said Motion of No Confidence.

On the 15th March the Prime Minister Dr. Denzil Douglas stated on an interview on local radio that the constituency boundaries are illegal. He further indicated that he was not going into another election with illegal boundaries. However the opposition is contending that to date no boundaries report and no debate on boundary changes have taken place in Parliament.

Therefore any attempt by the Prime Minister to Gerry-mander the boundaries for the upcoming election will be strongly and aggressively resisted, stated the opposition members.

What the opposition members are hoping is that the actions they are taking will result in the expeditious tabling and debate of the No Confidence Motion before any other parliamentary or legislative activity other than the budget.

It is expected that the Judge will hear the Injunction on Friday April 5th 2013.