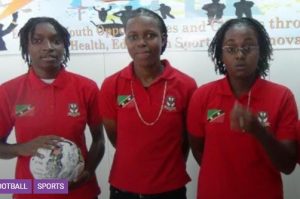 It was a historic first, as the St. Kitts-Nevis female Football team, conducted training exercises at the ET Willet Park, on Sunday 8th April.

Coach Jones was adamant that it is indeed a St. Kitts-Nevis team and it is only fair that the Nevisians get a share of the pie.

Additionally, he noted that he is keen for the young ladies to train and practise in different environments; under varying conditions.

He was also quick to point out that there are three Nevisians in the squad: Kerisha Powell; Siana Leader and Rozel Liburd.

The young ladies are currently preparing for two major tournaments:

The CONCACAF challenge series from 18th to 23rd April and then in the month of May, they will be involved in the world cup qualifiers. Some seven overseas players are expected in to boost the strength of the team.

Captain of the team, Shanda Wilkinson, who indicated that she has been playing the game from her early years at Primary School, is confident that the team would do well in the upcoming tournaments.

“We have some very talented players. Once we stay together as a team, there is nothing anybody can do to stop us,’ she stated confidently.

THE St. Kitts-Nevis National female football team has been drawn with Trinidad & Tobago, Dominica, US Virgin Islands and Grenada, for the 2018 Concacaf Caribbean Women’s Qualifier.