Ms. Sonia Boddie, Public Relations Officer for the St.Kitts and Nevis 4-H Organization is touting the 1st Global 4-H Network Summit held under the theme “ Youth Harnessing the Power to Change the World” in Seoul, South Korea as a “huge success”. Ms. Boddie who participated in the week long Summit which ran from October 27th to November 1st, has indicated that the Summit provided excellent networking opportunities for all participants.

She emphasized that it was the very first time that representatives from almost every 4-H organization around the globe, had the opportunity to come together and dialogue, thereby strengthening the Global 4-H Network. Boddie underscored that particularly for representatives from the Caribbean and Latin America, the Summit provided the right platform for the Caribbean and Latin America (who are considered as one region), to bridge the gap and begin coordinating efforts to advance 4-H in this region, despite language and cultural barriers. She added, that beyond the opportunity to promote her local 4-H organization, she had the opportunity to constantly promote our beautiful twin island Federation to many, who had never heard of St.Kitts and Nevis, and for her that was also a huge plus. 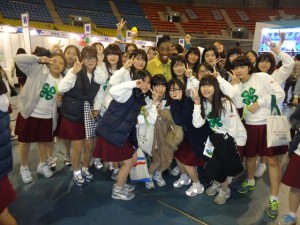 Boddie highlighted that 4-H representatives from over 70 countries, from every region in the world, had the opportunity to share experiences of their successes and equally of their challenges and discussed the way forward to ensure that the 4-H movement continues to assist countries in tackling global issues such as poverty, unemployment (especially among the youth), food security and a host of other socioeconomic problems facing young people.

She remarked, “Even though it was evident that because of our cultural differences the 4-H program was structured somewhat differently from country to country, it was still obvious that we shared one common vision, and that is “To make the best better.” She added, “The summit has significantly broadened my knowledge of the 4-Hmovement in general, and the impact it has had around the globe, as well as the potential it has, to help reshape the society of St.Kitts and Nevis via the moulding of our youth”. She remarked, “Once our local organization receives the right support, is able to build solid partnerships, takes onboard some of the ideas presented at the summit and accesses some of the opportunities for training, materials and other resources that were offered by other countries, we would be on an even better track of positively impacting more youth across the nation.”

Boddie noted that Korea for example, which has the biggest 4-H movement in the world, with some 71,609 members, has the 4-H as part of the primary school curriculum because the government values the 4-H model which encourages youth to “Learn by Doing”, through the experiential learning model. She emphasized that the 4-H movement which has its roots in teaching youth the importance of agriculture, but also teaches young people about leadership, life skills, home management, being good citizens, entrepreneurship and other things to aid in their positive development, has and should continue to be used to empower the youth of every country.
She added, that the many Korean senior government officials, who gave remarks at the event, praised the 4-H movement for being the cornerstone of the modernization of the rural areas of the country. The officials also thanked the movement for helping to significantly transform the economy, by improving the living conditions of vulnerable groups and helping to decrease poverty and illiteracy amongst citizens. Credit was also given, for producing outstanding leaders, who are helping Korea to progress in different avenues.

The PRO further informed that at present there are some 7 million 4-H members worldwide and it is the goal of the Global 4-H Network to increase its membership by 25 million, by the year 2025. The summit ended with a Proclamation ceremony, where it was declared that November 1st each year would be commemorated as Global 4-H day.
Boddie concluded, by saying the Summit, was indeed a life changing experience, for her and she is excited to share all that she has learnt with her Executive, so that they can go back to the drawing board, and improve upon plans to take St.Kitts and Nevis 4-H to a higher level.

The 1st Global 4-H Network Summit was held to commemorate the 100th anniversary of the establishment of the 4-H movement, which was first started in the United States in 1914.