22nd June 2015, Basseterre – The St. Kitts Music Festival, slated for 25th – 27th June 2015 will see performances from a bevy of world class artistes. But this year the festival, now in its 19th year, will see world class hosting in the form of Sports Illustrated Swimsuit model, Damaris Lewis. 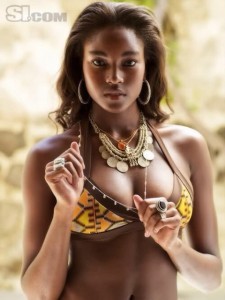 Miss Lewis has been contracted to host on Saturday 27th June, 2015, which features performances by Trey Songz, Jason Derulo, Arturo Tappin and Infamus.

Lewis hails from New York of Kittitian parentage and thus, is truly homegrown. Appearing opposite Bradley Cooper in the film, ‘Limitless’ and appearing numerous magazine covers for Fitness Magazine.

With parents hailing from Molyneux and Bassterre, Damaris Lewis has the Federation of St. Kitts & Nevis running proudly through her veins. Growing up in New York, she studied with a conservatory-style arts concentration in dance at Fiorello H. LaGuardia High School of Music & Art and Performing Arts.

Modeling since the age of 15, Lewis was discovered while performing with her childhood dance company Restoration Dance Theater at Chelsea Piers. She eventually signed with Elite Model Management. She went on to appear for three consecutive years in the famous Sports Illustrated Swimsuit Edition in 2009, 2010, and 2011.

In 2012, she got the chance to showcase for Prince, who selected her as his Muse & Dancer during his ‘Welcome 2 Australia’ Tour. Lewis continued touring with Prince for his ‘Welcome 2 Chicago’ Tour, appearing with the band on Jimmy Kimmel live, SXSW 2013 in Austin TX and the 2014 Essence Festival in New Orleans.

With a strong love of basketball, Lewis starred in the high impact promo and lead-in video that kicked off the 2013 NBA All-Star Game played in Houston, Texas on TNT. Today she serves as NBA Style Correspondent for Turner Broadcasting.

She devotes her down time to volunteering with nonprofit organizations Project Sunshine and Garden of Dreams. With 4 years of successful dance camps with Project Sunshine and now, The Garden of Dreams Prom Chairwomen and mentor for their annual Talent show, Damaris knows that it’s up to her to influence the next generation and for them to have a positive role model in the entertainment industry.