Cuban Vice President of the Council of State, Her Excellency Gladys Bejerano Portela received on Wednesday, 20th September 2017 at the Revolution Square in Havana, the St. Kitts and Nevis Ambassador to the Republic of Cuba, Her Excellency Verna Mills.

Ambassador Mills handed the Vice President her letter of credence. She was accompanied by her husband, Jéneve Mills. 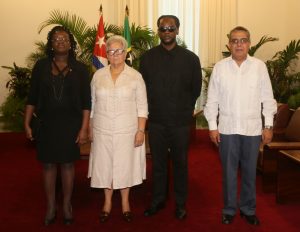 During her private audience with the Vice President, Ambassador Mills communicated greetings from the Prime Minister, Dr. the Honourable Timothy Harris, the Government and people of St. Kitts and Nevis to the Vice President and extended their wishes for continued progress and prosperity for the Cuban people. She also reiterated her commitment to further strengthen the relationship between both countries.

On behalf of the Government and people of the Federation, Ambassador Mills expressed her condolences for the loss of lives and the devastation caused by Hurricane Irma and wished the Cuban people a speedy recovery to normalcy. She also expressed her personal condolences on the passing of the Commander in Chief, Fidel Castro who she referred to as a towering international figure whose legacy will forever live on. Ambassador Mills stated that she was able to benefit from Fidel’s vision and the Cuban generosity, having studied in Cuba from 1999 to 2005. She also thanked the Government and people of Cuba for their continued support and highlighted the important contributions Cubans have made to the development of St. Kitts and Nevis, particularly in the education and health sectors.

Earlier on Monday, 18th September 2017, Ambassador Mills also handed over a copy of her credentials to the Vice Minister of Foreign Affairs, Ana Teresita González Fraga. Ambassador Mills is the first female Ambassador and second resident Ambassador accredited to the Republic of Cuba by St. Kitts and Nevis.

Press Release from the Ministry of Social Development and Gender Affairs et al :…