St. Kitts and Nevis Patriots Donates to Department of Sports

Basseterre, St. Kitts, October 21, 2015 (SKNIS): The St. Kitts and Nevis Patriots – the franchise which plays in the Caribbean Premier League (CPL) Twenty20 Tournament – has demonstrated its commitment to develop all sporting forms with the recent donation of 100 footballs to the Department of Sports in St. Kitts and 50 in Nevis.

Chairman of the Patriots, Uday Nayak, made the donation recently which was accepted by the Deputy Prime Minister and Minister of Sports, Honourable Shawn Richards.

“I love cricket but that does not mean everything should stop at cricket,” Mr. Nayak said. “It should also encompass football and basketball and any other sport that we think we can engage with and bring our relationship into that.”

That relationship involves leveraging team sponsors and other business partnerships that exist explained Richard Berridge, the Patriots’ Chief Executive Officer (CEO) and General Manager. He promised that this was “the first of many donations” and pledged his hopes to deepen the working relationships with the Director of Sports, Anthony Wiltshire; Permanent Secretary, Christopher Herbert; Ambassador Jonel Powell; and Deputy Prime Minister Richards, all of whom were present for the handing over.

“This type of partnership … is one which is welcomed by the Government and the Ministry of Sports,” the Sports Minister said, while highlighting that the franchise is only one year old. He added that this made the donation even more noteworthy and welcomed the promise of future collaborations.

That is expected to include additional donations of sporting equipment as well as assistance with the maintenance and upgrade of Warner Park. 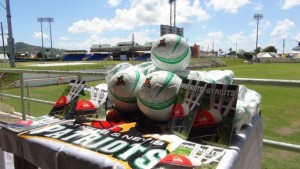 Hollywood Set to Take A Break After Creating History