BASSETERRE, St. Kitts, January 24, 2019 (Press Unit in the Office of the Prime Minister) – The Prime Minister of St. Kitts and Nevis and current Chairman of the Caribbean Community (CARICOM), Dr. the Honourable Timothy Harris, is currently in the Cooperative Republic of Guyana where he is holding several rounds of discussions with top level CARICOM officials, including Secretary-General, Ambassador Irwin LaRocque. 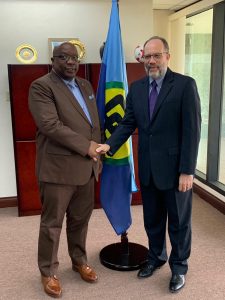 Prime Minister Harris’ visit to the CARICOM Secretariat this week comes ahead of the 30th Inter-Sessional Meeting of CARICOM Heads of Government, which will be held in St. Kitts and Nevis from February 26-27.

Today, Thursday, January 24, the Prime Minister met with Ambassador LaRocque for discussions. The prime minister is also expected to meet with the members of the Secretariat’s Executive Management Committee. The CARICOM Chairman will also address the staff of the Secretariat.

Later this evening, Prime Minister Harris will attend a special dinner hosted by the Indian High Commissioner in honour of 150 years of Celebrating The Mahatma.

On Friday (January 24) morning, the St. Kitts and Nevis Prime Minister, accompanied by the CARICOM Secretary-General, is expected to meet with President of the Cooperative Republic of Guyana, His Excellency Brigadier David Granger at the State House.

Dr. Harris is also scheduled to hold discussions with the Leader of the Parliamentary Opposition, Mr. Bharrat Jagdeo while in Guyana.