St. Kitts is to get its first high-rise buildings, construction of Prime Hotel and Condominiums to begin in May 2014 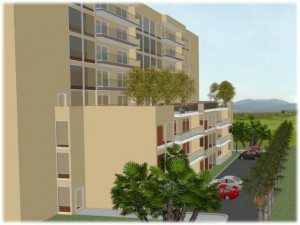 In welcoming the development, Prime Minister Douglas said St. Kitts and Nevis continues its forward movement on many fronts.

“We continue, first and foremost, by ensuring that Kittitians and Nevisians of vision, of competence, and capability continue to play a pivotal role in the social and economic advancement of our Federation. We continue by ensuring that the implementation of these individuals’ vision redound to the benefit of nationals in the construction trades; air conditioning and refrigeration services; accounting services; excavation services; hospitality services; and the range of other services, the combination of which is key to the transformation of unique ideas into viable, functioning, vibrant realities,” said Prime Minister Douglas.

He credited Nevisian-born Mr. Faron Lawrence, an accomplished and truly outstanding son of the soil, for being such a visionary.

“Prime Residence Condominium Project, of which Mr. Lawrence is the developer and investor representative, is such an idea. Indeed, some 150 persons will be employed here during construction, with 100 more being employed on an ongoing basis, post-construction,” said Dr. Douglas, who singled out the other investors as Mr. Gholam Abbas Fahim and Mr. Sirous Motevassel, both of whom have become citizens of St. Kitts and Nevis under the Citizenship by Investment programme.

He said St. Kitts and Nevis offers an unending stream of exquisitely beautiful vistas – no matter where in the Federation one may be and the Half Moon Bay area, designated as Half Moon Phase 4 Development is no exception.

“This explains why so many local and international interests, who are involved in the hospitality industry, see St. Kitts and Nevis as a prime location for the establishment – or expansion – of their businesses.

“In addition, socio-political and economic tumult is now the order of the day in many areas around the world. And so, the focused, disciplined, high-competence governance profile that St. Kitts and Nevis has successfully developed has served as a definite magnet where local and international investors are concerned,” said Dr. Douglas.

He disclosed that Mr. Fahim had visited neighbouring St. Maarten and other islands to seek opportunities for investment and returned to St. Kitts because the factors which he had outlined in an interview were responsible in motivating him in making that final decision that St. Kitts and Nevis was the place to invest.

“And in order to ensure that St. Kitts and Nevis continues to be the gem that it is, my Government insists on the most demanding due diligence procedures to be followed,” said the Prime Minister.

Prime Hotel and Condominiums which will inject some US$70 million in the local economy will be located on land that was bought from private owners.

Construction is to begin by May 2014