St. Kitts and Nevis’ Prime Minister the Rt. Hon. Dr. Denzil L. Douglas and Minister of Health, the Hon. Marcella Liburd are expected to highlight another of the promises made in the re-election campaign in 2010 during Friday’s ceremony to open a new Haemodialysis Unit to treat patients with renal (kidney) failure at the Joseph N. France General Hospital. 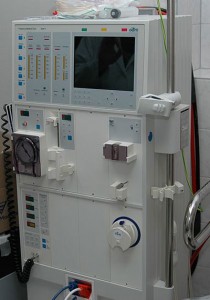 “J.N. France is expanding its dialysis services even further, and is moving toward the second modality of dialysis to offer haemodialysis to the public,” states the Labour Party’s 2010 Manifesto on page 24.

Ministry of Health officials has disclosed that the Haemodialysis Unit will consist of four dialysis units, three of which are already installed.

Recently Prime Minister Douglas welcomed the Cuban-born nephrologist as part of the contribution by the Government and People of the Republic of Cuba.

The staff of the Haemodialysis Unit is also comprised of two nurses from the Philippines and local nurses.

Rev. Canon Isaiah Phillip will give the invocation after which Permanent Secretary in the Ministry of Health, Mr.

Andrew Skerritt will give the welcome remarks and provide an overview of the project.

Dr. Jean-Marc Pierrot will give remarks prior to remarks from Prime Minister Douglas and Minister Liburd.

Nurse Clilia Davis will render a song, “JNF on the Rise”; former Minister of Health, Mr. Rupert Herbert will play a steel pan selection and the Unit’s nurses will also sing.

The Vote of Thanks will be given by Medical Chief of Staff, Dr. Cameron Wilkinson.

The Unit’s Mission is to promote to optimum well-being of patients with acute or chronic kidney disease or end stage renal disease.

The vision is to provide quality and efficient care to patients and the value statement is ‘People first, quality always.”