CASTRIES, St. Lucia, Wednesday May 8, 2013 – St. Lucia was jolted by an earthquake with a magnitude of 4.1 late on Tuesday night, the Trinidad-based Seismic Research Centre (SRC) of the University of the West Indies (UWI) reported Wednesday. 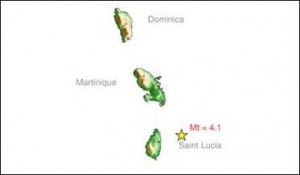 UWI said that the quake with a depth of 20km “may have been felt in nearby islands” but that there have been no reports of injury or damage.

The earthquake is the latest in a series of tremors that have occurred in several Caribbean countries in recent months.

Earlier this month, Trinidad and Tobago was shaken by a quake with a magnitude of 3.7 on the Richter scale just as SRC officials warn the oil rich twin island country to be prepared for a major earthquake.

Late last month, Antigua and Barbuda and several other countries in the Leeward Islands were also affected by an earthquake with a magnitude of 5.1.