KINGSTOWN, St. Vincent, Monday January 12, 2015 –10:39 pm Atlantic Time, CMC: The St. Vincent and the Grenadines government Monday night reduced the number of fatalities resulting from an accident in which a bus carrying several school children plunged into the sea. 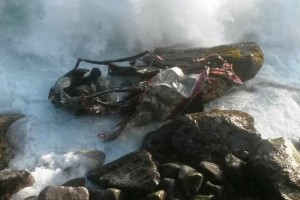 The Ministry of Health said it could verify that five people were killed as a result of the incident in which the minibus plunged into the seas at Rock Gutter, a community between Owia and Fancy in north-eastern St. Vincent Monday morning.

Communications officer in the Ministry of Health, Wellness and the Environment, Neeka Anderson-Isaacs, said that two people are missing and 10 have been hospitalized at the Milton Cato Memorial Hospital (MCMH) while four others are at the hospital in Georgetown.

Earlier tallies, based on police and other government sources, suggested that seven people had been confirmed dead.

The Ministry of Health said that approximately 21 passengers, including 14 students from the North Union and Georgetown Secondary Schools respectively, were in the bus when the incident occurred.