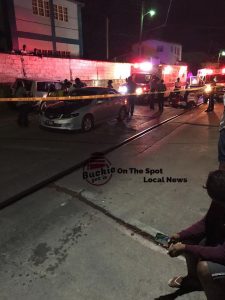 According to sources, a male was stabbed in College Street Ghut. The male who was stabbed allegedly jumped into his vehicle and mowed down the stabber and his female companion.
Police and Emergency Medical Technicians (EMT’s) are on the scene.
The stabbing is the second in 24 hours. A male was reportedly stabbed in Basseterre on Friday night and was rushed to the J N France General Hospital where he was treated and discharged.