Prospect-Nevis-The Ivor Walters Primary school, was abuzz with excitement on the morning of Thursday 25th April.
During the morning assembly session, two of the students, were lauded for their tremendous achievements at the recently held Ross University Lab week Science fair. 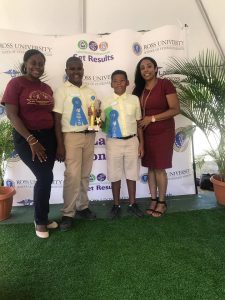 The two students, Lythe Browne and Nevroy Manners, won the contest for the school, from among nine competing schools, with the other eight, all based in St. Kitts.
An obviously elated Headmistress, Mrs. Janice Richards, heartily congratulated the students for their efforts and Guidance Counselor, Mrs. Shevonne Lowe, whose brain child it was to do a presentation on geothermal energy.
Also paying special tribute to the students, was Permanent Secretary in the Ministry of Education, Mr. Kevin Barrett, who noted that Nevis was already heading down the road of geothermal energy and it was encouraging to note that students at such an age, were already demonstrating interest and some knowledge, as regards the workings of the energy source.
The two students placed their presentation on display and explained its workings to the overawed audience, complete with flicking the switch, with the bulbs lighting up, to much applause.
Headmistress Richards then presented the students with their winning cheques of $325.00 EC each and noted the school was also rewarded through their efforts, in receiving two cheques of US 600.00 each, for the win in the renewable energy category and then for the overall winning achievement.
Education Officer Mrs. Averil Elliot, also presented the two students with two bags, as part of their winnings.