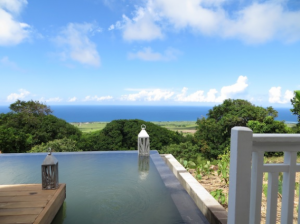 “The SIDF has indicated that it does not wish to be involved long-termly in the resort project, and having now seen the implementation of the construction phase of the project, has recently agreed to sell its share in the project to a Swiss investor in excess of EC$50 million,” Minister of Information, Sen. the Hon. Nigel Carty said.

He also disclosed that Government is also pleased to report that the famous Golden Lemon Hotel has been purchased by Belmont Resort Ltd.

Golden Lemon is to be redeveloped into an upscale beachfront property to complement its 5-Star resort project at Kittitian Hill. The first phase of Kittitian Hill is expected to be open for business in the next six to eight months.

Phase 2 of the Kittitian Hill development is to start shortly and will feature another hotel and many more villas and properties.

“This phase will ensure even more employment and business opportunities for our local people and will further boost the development of the tourism sector for the long term,” said Minister Carty.

On the closure of the sugar industry in 2005, government entered into a development agreement with Belmont Resorts Limited for the development of an upscale 5-Star resort consisting of a cottage hotel, villa apartments, a major championship golf course and a creative arts centre at Kittitian Hill.

With the onset of the global financial crisis, including the CLICO fiasco, the project experienced significant difficulty and as a result the SIDF made a decision to buy a stake in the project to save hundreds of jobs for persons who were formerly employed in the sugar industry and to further ensure the successful implementation of the project which itself would create hundreds of long-term employment and business opportunities.

Government was concerned that potential opportunities for farmers, landscapers, builders, electricians, plumbers and many others would not come to fruition.

Moreover, the long-term benefits that would accrue to many persons who would work in the tourism and hospitality sector would be lost.

Further, the vision to build a firm base for tourism, and sports tourism additionally, could have been severely undermined if the hotel, golf course and villas were not constructed. Hence, the SIDF made the wise decision to support the project and save it from collapse.