(CHARLESTOWN, NEVIS)- History was made this morning Wednesday, December 17, 2014 at the Red Cross Building, Chapel Street, Charlestown when the members of the People’s Action Movement (PAM), People’s Labour Party (PLP) and the Concern Citizens Movement (CCM) came together and signed an agreement termed the “Charlestown Accord”.

The ‘Charlestown Accord’ as presented by the members of the tri-party opposition alliance, Team Unity is the formalizing of a number of agreements and commitments that Team Unity promised to the people of Nevis by the Team Unity Government if the candidates of the tri-party are successful in this upcoming general election to form the next Federal Government. 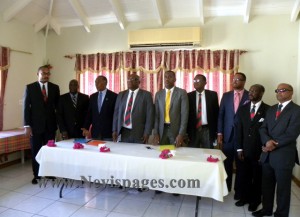 Deputy Leader of Team Unity, Hon. Mark Brantley stated that he was quite elated to be a part of such a historic occasion. He also stated that the three parties that have come together did not do so merely because of self-aggrandizement or lust for power, but to put aside their differences to bring into being a new government for the betterment of the country.

In conclusion, the Deputy Leader noted that Team Unity proposed the terms to the agreement to guide the process of healing between the people of St. Kitts and Nevis. He indicated that the ‘Charlestown Accord’ will ensure that all the people of the Federation are permitted to equitably enjoy the full fruits and benefits of their citizenship; and to access any and all resources of the nation of St. Kitts and Nevis.

The agreement states that under a Team Unity Government:

Supporters and candidates of each party were present at the historic ceremony.

Some took the airwaves and expressed their dissatisfaction with the way the agreements were set about. Some were highly disappointed and unsatisfied with the agreements. Others termed historic occasion as ‘weak’ and grade it a ‘D’.