one of the main courts situated at the Four Seasons Resort, Nevis. 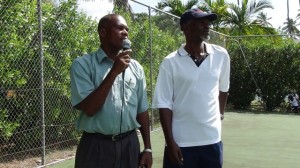 The two coaches in charge of the eager children are Chris Myroid, the Tennis professional employed at the Resort and Anthony Webbe, the long serving President of the Nevis Tennis Association.

As the children went through some basic paces of learning to hit the tennis ball in terms of service and control, Webbe explained that there were 26 children registered at the training camp and that they were really enthused and excited about the program.

The originally scheduled two weeks of coaching will be badly affected however and may work out to a total of five days, as the hotel will be closed to the general public from Wednesday 31st July until Sunday 4th August and then early in the next week, Monday and Tuesday will be official holidays on Nevis.

He was however very grateful for the assistance provided by the hotel and noted that this assistance has become an annual feature.

He noted that towards the end of the training sessions, there may be some organized matches between the participants.