On Wednesday April 15, 2015, St. Kitts and Nevis native Mutryce A. Williams was one of five women presented with the Texas A & M University’s 2015 Women’s Progress Award at its annual Diversity Awards Ceremony. The Women’s Progress Awards have been honouring Texas A&M University students, staff, faculty, and administrators who encourage and promote sensitivity to and awareness of issues that relate to women since 1994.
The five awardees received recognition based on the following criteria: demonstrating a commitment to an improved environment for women students; showing commitment to women’s issues through volunteer work, elected position, advocacy, and/or other forms of leadership on or off campus. 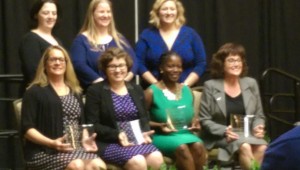 Williams who has an extensive volunteer career and who has advocated for the rights of all humankind through her writings and commentaries said that she accepted the award with great humility as it is the result of the influence of her mentor Mrs. Ingrid Charles-Gumbs.
She said, “Mrs. Ingrid Charles-Gumbs was the one who sparked my advocacy as it relates to the rights of women. She was the one who served as a model, and a mentor. She was the one who molded me and provided me with the opportunities to not only have my voice heard as a young woman but most importantly she constantly reminded me of the importance of helping others.”
Williams also noted the influence of her beloved grandmother Ms. Agnes A. Williams who was determined to raise a young woman who would grow up to make a difference in the lives of others. She said, “My grandmother always told me that I ought to let service be at the heart of everything that I do…to her service to others was everything. It meant everything.”

Williams who will receive a Graduate Certificate in Advanced International Affairs with a double emphasis in Diplomacy and Intelligence from the prestigious Bush School of Government and Public Service at Texas A & M University, in May 2015; added that the award also holds special meaning as it embraces the philosophy, purpose and core values of Texas A & M University. She said that it is the school’s purpose to develop leaders of character dedicated to serving the greater good.
Texas A & M consistently ranks among the United States’ top universities, with a number of its individual programs recognized as Top-10 in the nation. It holds membership in the prestigious Association of American Universities, one of only 62 institutions with this distinction.