Tropical Storm keeps Allure of the Seas from Port Zante 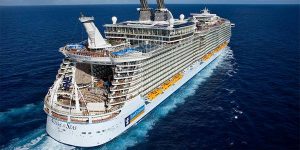 Basseterre, St Kitts, August 26, 2019 – A Tropical Storm Dorian, brewing in the Caribbean and aiming toward the Lesser Antilles has prompted cruise ship itinerary changes to St Kitts and other destinations, according to Cruise Critic.
Allure of the Seas, which left Fort Lauderdale, Florida on Sunday has switched from an Eastern Caribbean itinerary to a Western Caribbean sailing. Labadee, Falmouth and Cozumel will replace stops in Nassau, Bahamas, St. Thomas and St. Kitts.

Symphony of the Seas, which left Miami, Florida on Saturday, August 24, has also rerouted to a Western Caribbean itinerary, a Royal Caribbean spokesperson said. The new itinerary vists Labadee, San Juan and Perfect Day at CocoCay, Royal Caribbean’s private island.
Harmony of the Seas, which departed from Port Canaveral on Sunday, switched to Western Caribbean, and will be going to Perfect Day at CocoCay, Cozumel, Roatan and Costa Maya.

Several other cruise lines have ships making Eastern Caribbean sailings this week. A spokesperson for Carnival Cruises, which has the Carnival Fascination visiting on Wednesdays said that no changes had been made so far. Cruise Critic will continue to monitor Tropical Storm Dorian and provide updates.
Royal Caribbean International’s meteorologist, James Van Fleet, noted that while there were a few tropical disturbances heading into the weekend, the storm that evolved into Dorian was the most concerning.

“This one needs watching,” he said on Friday.
Tropical storm conditions are expected in the Lesser Antilles, the Caribbean islands made up of Barbados, Antigua, St. Kitts, Dominica, Grenada, St. Lucia, St. Vincent and the Grenadines and Trinidad & Tobago, according to the National Hurricane Center. Graphical projections from the National Hurricane Center show the storm arriving in Barbados early Tuesday morning.

While it’s still too soon to tell the storm’s path, the National Hurricane Center has advised interests in Puerto Rico, the Virgin Islands and Hispaniola, the island containing the countries Haiti and the Dominican Republic, to monitor Tropical Storm Dorian.