Twin sisters and their best friend died in an early-morning car crash in San Fernando yesterday.

Khadijah and Khertima Taylor, 18, suffered massive head injuries when they were thrown from the vehicle and died at the scene. 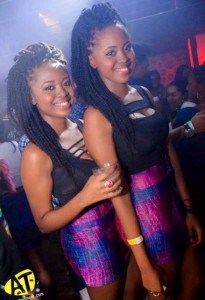 Their friend, 19-year-old Kafiya Gill, died while being treated at the San Fernando General Hospital.

Driver of the white Mazda 3 car, Anthony Balkissoon, and passengers Teenisha Garcia, 19, and Akinton Derrick, 22, were taken to hospital by paramedics.

The six were returning from a party at a new nightclub in La Romaine, when Balkissoon crashed around 4 a.m.

Police said the car flipped several times and landed vertically between the pillars of a bridge at the Cross Crossing interchange.

Fire officers assisted in removing the car with a hydraulic lift.

A female relative said the teenagers were inseparable and enjoyed spending time with their friends.

“They left home last night to go to a lime with some friends. They were so happy when they left, we didn’t know it was the last time we will be seeing them alive,” the relative said.

President Anthony Carmona was among the scores of people who visited the Taylors’ home to offer condolences yesterday.

Gill, of Cedar Drive, Pleasantville, had also attended St Joseph’s Convent, where she met and became friends with the twin sisters.
Her father, Desmond Gill, said: “She was a very bright child, always studying. Last night she told me she going with some friends to the new club. She said she will get a drop home in the morning. That was the first time she ever allow a friend to drop her home. I always drop her and pick her up, anywhere she go.”

Gill said his daughter began working in the human resources department at the South West Regional Health Authority (SWRHA) a month ago.

“But she was going to further her studies in management. This is very sad,” he said.

Gill appealed to youths to drive safely. And he begged parents to keep their children close.

“You don’t have to go to a club to drink. Stay home and take a drink. I am a taxi driver for 20 years and that road not easy. This clubbing thing don’t make sense,” he said.

Gill said his daughter was withdrawn and lonely after her mother left their home two years ago.

“A breakdown in family life is causing all of this. After my wife left Kafiya was lonely and sad. She had her older brother, but she was missing her mother,” he said.

Senior Superintendent Cecil Santana, who was at the scene, pleaded with youths to slow down on the roads.

“I am appealing to motorists to please be careful, slow down, stop fast driving because you will reach where you have to go if you drive slowly. And you will save lives. Do not drink and drive,” he said.