The Royal Fleet Auxiliary ship ‘RFA MOUNTS BAY’ will pay a visit to Barbados from the 14 – 17 June 2019, as part of the UK’s preparations to provide regional support this Hurricane Season.

Equipped with heady duty vehicles, a Royal Navy Wild-Cat helicopter and personnel from 24 Commando Royal Engineers; RFA Mounts Bay Officers and Crew remain mindful that they could be called upon to provide a rapid response to any emergency in the region. 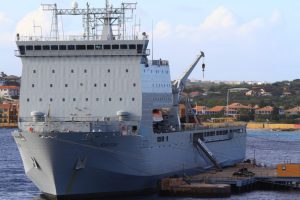 Since 2017, RFA Mounts Bay has been deployed to the region when she provided rapid and much needed humanitarian aid to the devastated UK Overseas Territories and Dominica, post Hurricanes Irma and Maria. The UK also maintains a year-round naval presence in the Caribbean to provide a rapid response to any emergency in the UK Overseas Territories.

RFA Mounts Bay is currently embarking upon her 2019 Hurricane season patrol, providing reassurance and support to UK Overseas Territories and the wider Caribbean.

The ship’s primary task is to provide enhanced security and reassurance to the UK Overseas Territories and regional citizens, including disaster relief when called upon. She will also be involved in counter-narcotic operations, later in the year, working with partners from across the region.

RFA Mounts Bay’s operational cargo includes tractors, diggers, trucks, quad bikes, command and all-terrain vehicles and disaster relief stores. The ship also has the ability to operate boats from her dock, which makes RFA Mounts Bay an excellent disaster relief platform. However, it is the skills of the crew and embarked personnel that make the real difference to assist an island’s emergency services during a crisis.

While the ship is in Barbados, her Commanding Officer will be making official calls on the Governor General and Chief of Staff, Barbados Defence Force, as well as organisations involved in national and regional disaster relief.

“To have a world class vessel like RFA Mounts Bay on standby, particularly during the hurricane season, offers a sense of reassurance to the UK and our partners across the region. The ship’s year-round naval presence in the Caribbean affirms the UK’s commitment to the Caribbean region and our pledge to provide the best possible support in crisis situations.”