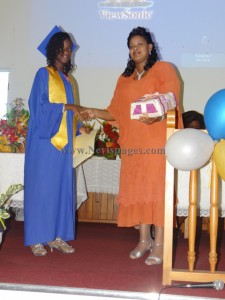 Under the patronage of Mr. Delroy Prentice and Ms. Deshanda Liburd the school said farewell to eleven students who will be journeying onwards to secondary school level in September. This event marked another successful year for the principal and staffs of the VOJN Primary School.

The ceremony began with the invocation by Mr. A Dennis Walwyn which was followed by the National Anthem sung by Aysia Allen.

The opening remarks were delivered by Chairperson, Ms. Shelly Weekes. She told the gathering that she was honored to be a part of such a momentous occasion.

In delivering the school’s 2013 annual report Head Teacher, Mrs. Shea Wilkin told those in attendance that she was very proud of what the school had accomplished over the past year. She showed gratitude to her staff for a job well done especially to the Grade 6 teacher, Ms. Daniele Wallace. She congratulated the graduates and encouraged them to aim for their dreams and to always remember this motto, ‘Aspiring for the Best’.

Mr. Steadroy Pemberton delivered the keynote address. As he reflected on the ‘old time days’ Pemberton challenged and encouraged the parents to be good role models in their children lives today as the world is now more advanced.

Ms. Jewella Queeley made remarks on behalf of the parents and Ms. Latoya Jeffers gave the vote of thanks.

Awardees were presented with certificates, prizes and bouquets. Poems, songs and renditions were delivered by the graduates and students of the school.

The event came to a close with the lighting of candles and recessional by the graduates.