Charlestown-Nevis–The funeral service of the late David Jonathan Watusi Wade, was held on Thursday, June 11, 2015 at the Charlestown Methodist Church.

The lanky 55 year old Rastafarian who made his significant contributions as an entertainer and taxi operator, passed away on June 2, 2015. 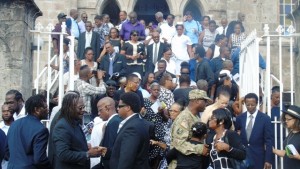 Nephew Malcolm Ramsey who delivered the eulogy, evoked some degree of laughter as spoke of his beloved uncle.

He indicated that Watusi who actually started his singing career as a Calypsonian, once rendered a song which contained 15 PAN-A-NAP’S and 12 PANA-NARP’S. He was such a precise man that he stopped the band to let the members know that they had missed 4 PANA-NARP’S during the rendition.

His buddy ‘Tricksy’ also indicated that he would easily have rendered the longest calypso in Nevisian Kaiso history.

On a more serious note however, Ramsey indicated that Watusi was one who gave of his all when he was dedicated to a task and he therefore took his music, be it Reggae or Calypso, very seriously and so too his work as a Taxi Operator.

He even sold the visitors his CD’S while they were touring with him.

According to Ramsey, while obviously dying and unable to walk, Watusi insisted that he be taken to his ‘cottage by the sea’ and that request was granted just prior to his passing.
He noted that his uncle’s final words to him were: ‘Ramsey, I believe in Jesus.’

Sister of the deceased, Mrs. Millicent Wade-Jones, read the words of his final song, apparently penned while he was at the ‘Pital’. He made reference to diabetes as a deadly scourge, a suggestion that that was his deadly ailment.

Hundreds of persons from all walks of life attended the funeral service and intense chants and musical renditions from some of the Rastafarian brethren and Rohan Claxton preceded the more somber aspects of the service.

Rohan Claxton performed a well received version of Watusi popular ‘Green Flash’ hit and the surprise entrance of famed local musician, Mickey Swanston aka ‘Ras Abudah’, certainly stirred many heads and hearts. His medley of songs in honour of his former friend of over 23 years, received tremendous applause.

The sermon was presented by Rev. Telford D. Matthew and the body was interred at the Bath Cemetery.