With six centuries to his credit this summer, Kittitian Akheam Fox moves up to the English Cricket Premier League

Basseterre, St. Kitts (September 23, 2013) — When Akheam Fox boarded a British Airways plane at the R.L. Bradshaw International Airport on Tuesday January 17, 2012 bound for England, he received two complementary advises. From his parents, Mr David and Mrs Lynette Fox “Do well in your studies”, and from his cricket coach and mentor, Mr Keeth Arthurton “Do well on the cricket field”. 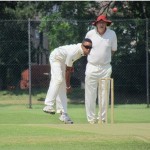 As the Federation of St. Kitts and Nevis celebrates its 30th Anniversary of Independence, Akheam D. Fox is about to commence the third academic year of his four-year Bachelors of Arts programme in Information Technology for business applications at Oxford Brookes University in England.

In his studies, he continues to be very impressive while performing at the highest levels of expectations. Word out of England is that over the past two academic years of studies he has presented with a most impressive accumulated GPA of 3.70.

Akheam, the ‘Federal Youth Cricketer of the Year’ in 2010 is also achieving magnificent improvements in his general cricket performance during the same period.

He continued his cricket development during the English 2013 summer season, playing in the Cherwell League (Division 1) for the Oxford Cricket Club, for Free Foresters Academy (comprising only of the elite cricketers between the ages of 18-23), as well as the Heartache Cricket Club in the Sunday Leagues of Oxfordshire.

During the season he completed six centuries and eight fifties. On three of the eight fifties, he ended up with scores of 92 not out; 95 lbw; and 96 lbw — he was so close to achieving an incredible nine centuries in the 2013 season.

Akheam’s first century of the 2013 summer season was attained on June 14 when he was 101 not out for Linace College vs. Wolfkin College (T20), with fourteen boundaries. On July 7 he was again on target, emerging with 117 not out with twenty-one boundaries, for Emeriti Club vs. Wethered Lillies.

On July 12 he made 102 runs while playing for Free Foresters vs. St. Edwards with eight boundaries and one six. Akheam featured in a record 268 runs opening partnership with Hugo Darby (a participant of the Darren Lehman Academy in Australia). Hugo made 139.

He bagged his fourth century only two days later on July 14, when he was 130 not out for Emeriti Club vs. Wikenders, with twenty boundaries.

He made the fifth century on July 21, when he was caught at 122 while he debuted for Heart Ache Cricket Club (owned by Tim Rice, famous writer for singer Elton John) vs. Wikenders hitting eighteen boundaries and becoming one of only four players to make a century on debut for this 40-year-old club.

In so doing, he joined Alan Lamb (former England test cricket) who is one of the other three who accomplished that feat. Akheam featured in the establishing of a new club opening partnership record of 240 runs.

The final century for Akheam in the 2013 Summer Season was his 129 runs effort which ended when he was run out, on Sunday August 11. This match proved to be a most important milestone for the Kittitian cricketer.

While playing with the Free Forester Academy on July 12, he was being observed by one Tyler Lorton of South Africa, a member of the Free Foresters Club, and a cricket scout for Stony Stratford Cricket Club of North Hamptonshire.

Having seen Akheam’s consistent contributions to the superlative opening partnerships between Hugo Darby and himself, Tyler came to the conclusion that Akheam was too good for the English First Division and should be introduced to Premier League cricket.

Tyler spoke with his team manager, Stephen Richardson, about Akheam and arrangements were made for the Kittitian to take a one-hour trip down to Northhamptonshire to play in a trial match with a view to having him signed to play for Stony Stratford’s team in the English Premier League 2014 season.

That day, Sunday August 11, Akheam made the trip to Northhants and opened the innings for Stony Stratford. He struck nineteen boundaries and one six in his debut score of 129 before being run out. The team made 225 for 9.

As expected, Akheam was successful in his trial and is in the process of being signed to play for Stony Stratford Cricket Club in the English Cricket Board Premier League 2014. That will be Akheam’s first step towards the prestigious English County Cricket.

NB: Second instalment of Akheam Fox’s positive cricketing exploits and how he has become an ambassador for his country in the UK will appear next week. Do not miss it.