Workers in St. Kitts and Nevis to get long service gratuity 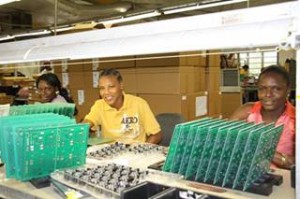 During debate on the Protection of Employment (Amendment) Bill, 2013, Minister of Labour, the Hon. Patrice Nisbett said the payment will come from the Severance Payment Fund and appealed to employers to respect the laws of the twin-island Federation and honour their financial obligations to the social fund.

“Indeed, Mr. Speaker, a significant amount of monies are outstanding to the various social Fund and it is the intention of the Government to strengthen and enhance its enforcement and collection inspectorate so that what is due to the people is collected,” he told lawmakers.

He admitted that although the global economic climate is still volatile and hostile to both labour and industry.

“Within this environment, many countries’ social protection safety net systems are under siege and indeed some social safety nets have actually been eroded and some shrunken,” he said.

Labour Minister Nisbett stated that St. Kitts and Nevis through the foresight of the Robert L. Bradshaw Labour Administration established a Social Security System, which can be counted as a ‘best practice model,’ throughout the region and beyond.

“We are now moving not to shrink the social protection safety net but indeed deepen and widen that net,” he said, pointing out that only a few of the economic entities have any form of pension plans for their workers.

“The majority don’t; and in these economically challenging times it is imperative that responsible Governments endeavour to secure and protect the welfare of its citizens and working people,” said Minister Nisbett.

He disclosed that it is against this backdrop and against the backdrop of a clarion call by the workers in St. Kitts and Nevis that the Government, having heard the cry, is moving with its alacrity to introduce the Long Service Gratuity, at cost neutral to the valued economic partners.

“For they will not be called upon to make any additional contribution to this social protection safety net initiative. The payment shall come from the Severance Payment Fund,” said Labour Minister Nisbett.

An employee is entitled to the long service gratuity if he or she retires at the retirement age of 62 as set out in the Socal Security Act, opts to retire after at least 10 years of service in one place of employment or dies while in the course of his or her employment after at least 10 years service. The long service gratuity is to be paid from the Serverance Payment Fund and paid within a period of 90 days.

The establishment of the long service gratuity is one of promises made to workers by Prime Minister the Rt. Hon. Dr. Denzil L. Douglas and his governing St. Kitts-Nevis Labour Party administration.

The promise can be found on page 21 of the Labour Party’s 2010 Manifesto and enunciated at several other for a including public meetings and the annual Labour Party conferences and Labour Day celebrations.