New River-Nevis- Scores of individuals showed up at the main road in the vicinity of New River Estate on the afternoon of Sunday 26th April, as reports of a major traffic accident made its rounds throughout the island.
The young man involved in the accident is Marvin Ross of Cherry Garden and who is said to be an employee of VON radio.

Unconfirmed reports indicate that he apparently lost control of the vehicle, which subsequently crashed into a piece of bridge, adjoining the road.
This effectively stopped the vehicle from going over into the nearby ghaut. However, on arriving at the scene, it was observed that part of the vehicle was hanging over the ghaut and the other part was still on the island main road, jammed against the bridge. 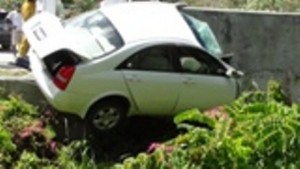 It therefore was a delicate operation to get the entire vehicle back onto the road . A backhoe operated by Shawn Simmonds of the Public Works Department, ably assisted by a truck with a crane, was used.
The Fire and Rescue team then utilized the ‘Jaws of life’ to effectively cut open the vehicle, under the supervision of experienced mechanic, Stanley Grant and ably assisted by the many Police officers on the scene.
The accident is reported to have taken place sometime after 1:00 p.m. but young Ross was finally removed after 3:00p.m. In the interim, first aid treatment was rendered by Dr. Essien and Matron Dias, along with other Nurses.
He was then raced to the Alexandra hospital via ambulance.
During the time that the workers were trying to get him free of the vehicle, individuals spoke to him and told him to be calm and he responded. His distraught mother and girlfriend were also on the scene.

Traffic was backed up for at least half a mile from the area of the accident in both directions.
Nevis Pages is yet to confirm the true condition of the injured man at this time.
–30–