On Friday the 20th September 2013 about 4:00 PM, members of seven (7) of the Uniformed Bodies, and one (1) Private Security Body participated in the First Uniformed Bodies Drill Competition at the Bay road in front of RAMS Supermarket. 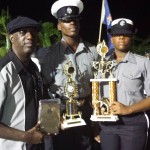 The uniformed bodies that were represented were:

7. Her Majesty’s Customs and Excise Department

The competition was based on two (2) categories: Personal and Group Drills Display. Each participating team comprised of two(2) participants. Each person started with 100 points and was judge based on uniform appearance, boots appearance, and ability to respond to commands such as stand at ease, salutes, right and left turn, march on and march off and foot drills to name a few.

The Royal St. Christopher and Nevis Force drill team consisted of the newest recruits; college bound and degree holders of the Force.

At the end of the competition, The Royal St. Christopher and Nevis Police Force drill team placed second in the team category, and in the individual category Constable Akeem Hendrickson tied at third place with Sherima Stanley of Her Majesty’s Customs and Excise Department.

Tied for 3rd Sherima Stanley of Customs and Excise Department and Akeem Hendrickson of the Royal St. Christopher and Nevis Police Force

There was a massive turn out as many spectators came out to witness the tremendous display of talent by the security bodies which ended later that day in the evening.

There was a large gathering to witness the event, and in attendance were His Excellency the Governor General, Sir Edmond Lawrence, the Right Honourable Prime Minister, Dr. Denzil Douglas, Commissioner of Police, Dr. CG Walwyn, and the Commander of the St. Kitts and Nevis Defence Force, Lt. Col. Patrick Wallace.

Commissioner Walwyn takes this opportunity to congratulate all the participants in this competition in particular Police Constables Maaisha Liburd and Akeem Hendrickson.