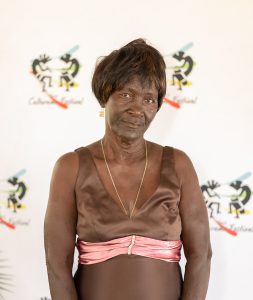 Ms Felicia Hicks, popularly known as Gladys France was born on 7th April, 1948. She is the second (and only daughter) of three children born to her mother Ms Francis Hicks.

Ms Hicks recalled that in 1968, she was recruited by Mrs Georgina “Annie” Mills to be part of the St. James’ Red Cross Troupe. This troupe was under the leadership of Ms. Laura Blake who started the group in 1962. Ms Hicks portrayed the role of a Red Cross nurse. She also recalled travelling to St. Kitts with the troupe in 1972 to participate in the National Carnival celebration.

In 2014 when the St. James’ Red Cross Folklore troupe was revived, Ms Felicia Hicks graduated to the position of matron, a role that she currently plays.

In addition to Red Cross folklore, Ms Hicks participated in other folk performances such as Tea Meetings and Blue Ribbon. She played all of these “sports” with cultural icons Mrs Georgina Mills, Ms Laura Blake and Mr. Nathan Jeffers. Ms Felicia Hicks has contributed tremendously to the cultural landscape of Nevis, and continues to be active in Red Cross. As a fitting tribute for her efforts as an outstanding cultural practitioner for many years and counting, she has been named as the patron for the Nevis Culturama festival for its 45th anniversary in July/August, 2019.