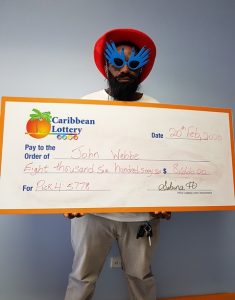 Being a winner in the Caribbean Lottery is nothing new for Ms. Williams, as she pocketed $20,000.00 in 2019 for correctly picking 9999 and before that, in 2018, she won $10,000.00. Although retired, she is still working because she likes her job. Her favourite game is the Pick 4 but she also plays the Pick 3, Lucky Pick “and sometimes the Super Lotto.” She says she plays the Caribbean Lottery games every day and that she has won more than once with the same number, adding: “People call me all the time whenever it plays, that is how well this number is known by me.”

Ms. Williams bought her tickets at Indo Caribe #1 & Indo Caribe #2 on Central Street, St. Kitts and collected her cheque on the day before her birthday. “I will buy myself a nice gift and save the rest of my winnings,” she revealed.
The winners from Nevis gave their alias names as “John Webbe” and “T. C.” Both are single men who bought their tickets at RSJ Main and play the Pick 4 “every day”. John Webbe says his grandmother told him that he would win the Caribbean Lottery one day. He chose the winning numbers because he kept seeing them on the license plate of a car that passed him multiple times on the same day. This was John’s biggest win to date, but T. C. has won as much as $30,000 before in the Caribbean Lottery and believes that he “may become a millionaire” one day. He will use some of his winnings to fix his motor vehicle, while Webbe will use some of his “to clear up some bills”.

All three luck winners have one simple advice to others: “You have to be in it to win it!”Office Manager at the Caribbean Lottery, Sabina Harrinarain expressed her delight: “Congratulations to all three lucky winners and I am happy to know that the games have changed their lives for the better.”