A touch of glass: Development Bank and I – The artist who ‘paints’ with stained glass

Basseterre, St. Kitts (October 21, 2015) — He was not fooling himself when on April 1 (All Fools Day) in 2012 he decided to set up his company. It was a sunny Sunday when he put together ideas that led to the formation of Caribbean Glass, which was duly registered on April 10 of the same year.

Mr Calvin Delpleche had been exposed to the unique art of manufacturing stained glass artworks and when the company closed, he decided not to waste the knowledge he had gained nor rob the country of such a venture. He brought this to fruition by venturing out on his own. He formed his own company and, thankfully, the art is still alive and well in the Federation.

“I worked with few other companies before I started here,” said Mr Delpleche. “The first stained glass company in St. Kitts was a company called Glass Island, owned by some Italians and I worked there, and when they left I worked with another lady who was the manager there, and then I left and started on my own company.”

He prepared a business plan and approached the Development Bank of St. Kitts and Nevis for a partnership through loan financing. Before he approached the bank he made good market research to ensure that the plan was feasible. According to Mr Delpleche the bank thought it was a brilliant idea and they decided to come on board.

The company is based in New Road Housing Project, from where he converts stained glass to precocious artefacts and souvenirs that are very popular with the tourists and locals alike. He has an industrial kiln from which he fuses the pieces of glass together.

He buys stained glass from the USA and at his small factory he manufactures stained glass artwork from panels to simple pieces of souvenir stain glass artwork. It involves a lot of cutting, and crushing of glass and melting of bottles. They are then artistically put together and a design is curved using moulds, and it is fused in the kiln at very high temperatures.

Mr Delpleche stated that it is specialised art glass, and that all glass has to be compatible. Some glass might appear to the causal eye as if they are of the same type, but their texture is totally different and they would not react well with others and the product will just break apart.

“I bought everything to start the company using loan funds from the Development Bank, everything you see here, especially the kiln, all the moulds, and the first stock of glass,” said Mr Delpleche. “I had an idea and they helped actualise it.

Development Bank’s Business Support Technical Officer, Ms Kimmoy O’Loughlin, explained that when Mr Delpleche brought his proposal to the bank, they thought it was a unique business, as it was the first Kittitian-owned business in that line, and also took into consideration that the person he was working for was closing down.

“So it was the opportune moment for him to enter the market and start his own business,” said Ms O’Loughlin. “We thought it would have been a viable business and it could have brought in income. And too, the tourism market is booming on the island. It was a good product to roll out to the tourists coming in our country.”

Business has been good for Caribbean Glass, and according to Mr Delpleche his main client is the Four Seasons Resort in Nevis which makes orders of souvenirs of different designs from him when they have new clients. He has an outlet at the Amina Craft Market in Port Zante, and he sells to cruise ship passengers.

He is adequately serving the tourist market as a number of galleries around St. Kitts buy from him as well, and he also exports to a gallery in Anguilla.

“I try my best to market St. Kitts,” said Mr Delpleche. “Facebook does a lot of advertising as well and so on. Definitely I have to promote St. Kitts.”

With the growth of the company and its products, he found the need to return to the Development Bank of St. Kitts and Nevis and was able to get another loan to enable him buy a vehicle, after his first vehicle broke down, to facilitate his movements and delivering of products to his clients.

With the purchase of another car he has moved into a new business venture of making licence plate numbers which he assures have a lifetime warranty. He intimated that he has been able to make progress in life thanks to the Development Bank of St. Kitts and Nevis which believes in the people of the Federation. 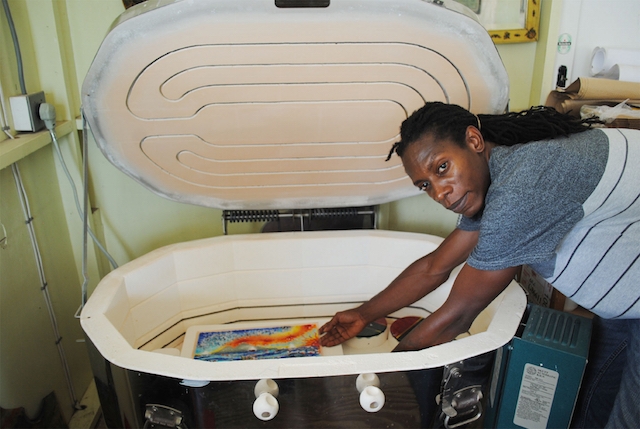