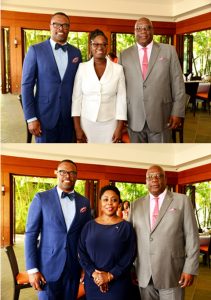 The announcement was made on Tuesday, July 02, during Prime Minister Dr. the Honourable Timothy Harris’ press conference.

“I want to inform that we have added to the list of responsibilities of a number of our ambassadors abroad. We have now, what you will describe, have given them multiple accreditation which means they are serving more than one country,” said Prime Minister Harris.

“That then, gives us a focal point to engage the Government of Mexico on matters of bilateral concern and interest and this then should help in our being able to have better cooperation and support from that government,” said Dr. Harris.

In addition to serving as St. Kitts and Nevis’ Ambassador to the Republic of Cuba, H.E. Verna Mills will also serve in the capacity as Ambassador to Ghana and South Africa.

“We are attempting then to improve our footprint in the African Continent and Mrs. Verna Mills, who is in Havana, will take on these responsibilities,” he said. “Importantly, both Ghana and South Africa also have their High Commissions, their Embassies in Cuba and so the cooperation and communication would be made easy.”

Prime Minister Harris used the occasion to personally wish H.E. Tross and H.E. Mills the “very best in their new assignments and with their increased workload”.

Her Excellency Sherry Tross was appointed as the High Commissioner of St. Kitts and Nevis to Canada in February 2018. Previously, she held senior positions with the Organization of American States (OAS) in Washington, D.C. From 2012-2015, she simultaneously served as Head of the OAS Secretariat for Integral Development and Director General of the Inter-American Agency for Cooperation and Development, becoming the first woman in the organization’s history to do so.