BASSETERRE, ST. KITTS, AUGUST 20TH 2013 (CUOPM) – The construction of the 20-acre Agro-Tourism Demonstration Farm at Sir Gilles demonstrates the commitment of the Government of St. Kitts and Nevis to transform the national economy from that of sugar agriculture to tourism and hospitality services. 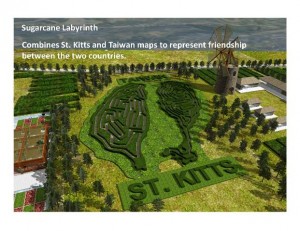 St. Kitts and Nevis’ Prime Minister the Rt. Hon. Dr. Denzil L. Douglas speaking during a ceremony marking a tour of the project by the President of the Republic of China (Taiwan), His Excellency Dr. Ma Ying-jeou, thanked the people of his constituency for their longstanding support since March 1989 and reaffirmed a commitment to ensure that their lives and these of all the people are improved.

He also spoke of the significance of the Agro-Tourism Demonstration Farm to the economic and social development of St. Kitts and Nevis.

He reiterated his government’s commitment to reduce its dependence on fossil fuel energy, in the generation of Electricity and increase dependence on renewable energy in creating the first entirely green country in the entire Caribbean Region.

“We shall achieve this by ensuring that there will be greater exploration on the dependence of renewable energy such as solar energy, wind energy and geothermal energy that would power our services here in St. Kitts and Nevis and will continue on a sustainable development of our country,” Dr. Douglas said.

The Prime Minister said the Agro-Tourism Demonstration Farm emphasises more than any other project between the Government and People of Taiwan and those from St. Kitts and Nevis a firm commitment of pursuing the relationship that is not only demonstrated in the political arenas around the world, “where we have a voice and speak on behalf of the People and Government of Taiwan, but it demonstrates our commitment as two countries, as two People’s and as two Governments to enhance the lives of ordinary people of St. Kitts and Nevis in a relationship of 30 years.”

Dr. Douglas, in thanking President Ma, noted the project embodies a commitment for the neutral enhancement of the lives of the people in Taiwan and St. Kitts and Nevis.