Tuesday 12th April, 2016 – The Valley, Anguilla: Pace, power and precision were the order of the day when the boys took to the field as part of the Digicel Kickstart Clinic which was held in Anguilla and hosted by coaches from Manchester City FC.

The boys had a good attitude as the coaches took them through their training session, teaching them the strategies and methods employed as part of the City Football Schools youth football programme.
Project Manager for City Football Schools and lead coach for the Digicel Kickstart Clinic, Alan Dixon, said; “The players had a great attitude from the beginning and were eager to learn. We had some ‘Manchester’ rain during the Clinic, however that did not dampen their spirits as they kept the training at a high pace and pushed through.”
At the end of the two-day Clinic, the top three players selected were 15 year-old Carlique Gumbs, 16 year-old Keanu Richardson, and 15 year-old Marley Ipinson-Fabien. They will represent Anguilla at the Digicel Kickstart Academy to be held later this year.
At last year’s Digicel Academy, the MCFC coaches selected players from the Caribbean to continue training with them for a week at their City Football Academy, an elite training and youth development facility in Manchester, England. While there, they got a unique opportunity to experience life as a professional footballer – learning the tactics and strategies employed by Manchester City FC first team players.
The Digicel Kickstart Clinics programme is a once in a lifetime opportunity for thousands of aspiring young footballers. Through the Kickstart Clinics, participants not only learn football skills and technical abilities, but also develop an ethos of professionalism and a good attitude – key attributes of successful people across all walks of life.
ENDS 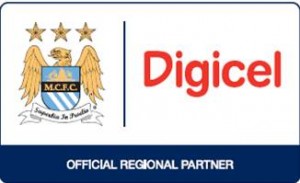 ABOUT DIGICEL GROUP
Digicel Group is a total communications and entertainment provider with operations in 33 markets in the Caribbean, Central America and Asia Pacific. After more than 14 years of operation, total investment to date stands at over US$5 billion worldwide. The company is renowned for delivering best value, best service and best network.
Digicel is the lead sponsor of Caribbean, Central American and Pacific sports teams, including the Special Olympics teams throughout these regions. Digicel sponsors the West Indies cricket team and is also the title sponsor of the Caribbean Premier League. In the Pacific, Digicel is the proud sponsor of several national rugby teams and also sponsors the Vanuatu cricket team.

Digicel also runs a host of community-based initiatives across its markets and has set up Digicel Foundations in Haiti, Jamaica, Papua New Guinea and Trinidad and Tobago which focus on educational, cultural and social development programmes.
ABOUT MANCHESTER CITY FOOTBALL CLUB
Manchester City FC is an English Premier League club whose roots began in East Manchester in 1880 as St Mark’s West Gorton. It officially became Manchester City FC in 1894 and has since then gone onto win the European Cup Winners’ Cup, four League Championship titles, including two Premier League titles in the last three years (2012, 2014), and five FA Cups. Manchester City FC is one of four teams comprising the City Football Group, 13% of which is owned by a Chinese Media Capital-led consortium, and counts New York City FC, Melbourne City FC and Yokohama F-Marinos among its sister clubs.
Under manager Manuel Pellegrini, the Club plays its domestic and Champions’ League home fixtures at the Etihad Stadium, a spectacular 55,000 seat arena that City have called home since 2003. Today, the Stadium sits on the wider Etihad Campus, which also encompasses the City Football Academy, a world leading first team training and youth development facility located in the heart of East Manchester. Featuring a 7,000 capacity Academy Stadium, the City Football Academy is also where Manchester City Women’s Football Club and the Elite Development Squad train on a daily basis and play their competitive home games.

Antigua: Union says it will continue seeking meeting on LIAT

Perreira: ‘Get to root of Dottin’s decision’