President of the Nevis Amateur Basketball Association (NABA), Ms Wanda Parry is encouraged by the participation level at a recent Basketball camp, conducted at the Brown Hill hard court. 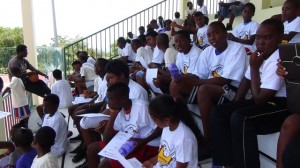 She noted that some 80 individuals participated and that that number comprised of children ranging from Primary school to Secondary School age.

During the week, the children were taught the fundamentals of the game of Basketball and also received some timely motivational speeches from some top officials within the Federation.
Among those speaking to the children were:

• Dr. Thelma Phillip-Browne-President of the St.Kitts Netball Association who spoke to the rules of the game
• Fitness instructor-Mr. James who spoke on Nutrition
• Elvis Williams who spoke about available scholarships etc
On the final day, the children were honoured to have the Federal Minister of Sports, Hon. Glenn Phillip who spoke about his journey in higher education which was initially started with a Basketball scholarship.
He later took the children to the court and taught them the basics in shooting and dribbling.
Some of the children in various age categories received basketballs as gifts for outstanding performances during the camp.