It was the penultimate race of the day of the five card horse race meet held at the Indian Castle race track, on Monday 1st April. 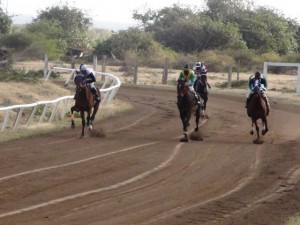 It was billed to be ‘the race of the day’ and involved WILD CANDY; REAL ASPECTATION and MR BIG PEPPE. Understandably, all eyes were on MR BIG PEPPE. The horse had established an all time record of winning its last 10 races on the trot and was aiming for an 11th win.

There were some who were quick to remind that WILD CANDY would have beaten the champion horse sometime prior to the ten consecutive wins and others would have highlighted the fact that REAL ASPECTATION has been making waves recently and had gained a promotion to Class A.

There was a buzz of excitement as the white flag went down and the horses got off to a quick start. REAL ASPECTATION soon ditched its jockey on the first turn and attempted to complete the race on its own, before it was pulled in.

Up front however, the two remaining horses stayed close to each other. As they neared the final turn, Brem Liburd trailing slightly on MR BIG PEPPE, started to make his signature move. He would have done it before and would have been confident that it would work once more. However, this time around, WILD CANDY also dug deep and pulled the final incline with consummate ease.

The two jockeys pulled out all of the stops as they neared the finish line but WILD CANDY held on to the slight lead right up to the finish line. A wide cross section of the crowd went into wild celebrations. MR BIG PEPPE had been finally beaten.

Here are the overall results for the day: