Boat captain ordered to pay $10,000.00 for importation of cannabis

(CHARLESTOWN, NEVIS)- The Sunday, February 9, 2014 ‘drug bust’ that was made by Customs Officers at the Long Point Port, following the return of a local vessel from St. Maarten, was finally brought to trial on Tuesday, October 28, 2014 at the District ‘C’ Magistrate Court.

The ‘bust’ involved Kenneth ‘Bailer’ Thompson of Stoney Grove, Nevis. Police and Customs Officers had five (5) charges against the defendant. They were: knowingly made a statement which was untrue in a material particular; importation; fraudulent invasion; imported cannabis packed in a manner with intent to deceive an officer; and possession of cannabis to supply to another.

Police Prosecution that was led by Inspector Stephen Hector called his first witness, Senior Officer, Nicheva Browne. Browne stated that at the time of the incident he was executing his duties by examining the cargo on the vessel M.V Lady Mignon that had just arrived at the Long Point pier from St. Maarten at about 5:40 p.m. Browne further stated that he was approached by Thompson who indicated to him that he had some cargo to be cleared. The Custom Officer said the cargo that was labeled ‘Bailer’ consisted of 2 boxes of Kellogg’s Cornflakes taped to boxes of Matrix and Caprisun juices.

Browne said he separated the packages and then began to open one of the Cornflakes boxes. At that point he said that he discovered a transparent vacuum sealed plastic bag that contained vegetable material suspected to be cannabis. Browne said he continued his examination and in the second box he retrieved two more transparent bags with cannabis. Thompson was asked about the findings and he responded ‘they suppose to be Cornflakes’. Police Officers were notified and Sgt. James Stephen responded to the scene. Thompson was later arrested and charged. 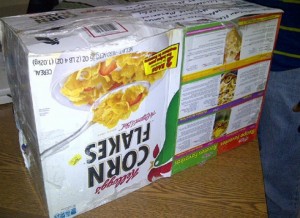 It was then the time for the accused to make its defense. Thompson, under direct examination by his Attorney stated that he called his friend in St. Maarten, Janet Richards and asked her if she could purchase a pair of dumbbells and send them on the boat. According to Thompson, Richards agreed and asked him if she could send a box of Cornflakes and juices to give to her brother in St. Kitts. Thompson said he responded in the positive, but he had no idea the intentions of Richards.

Thompson further stated that he called Customs Officer Browne to clear the packages. He said Browne questioned him about the findings that he retrieved from the Cornflakes boxes, and he told Browne, ‘it’s Cornflakes’.

Thompson told the court that the item shown to him looked like ‘wet down Cornflakes’. He testified that he had never seen compressed marijuana before. He said he advised the Police Officer to allow the package to continue to its final destination since he had no idea that the Cornflakes contained drugs.

Attorney Caines in an effort to free his client told the court that the facts are straight forward. He said that his client got a call and as a result he went to the Long Point Port to clear the dumbbells and the packages that were to be sent to St. Kitts. Unfortunately, according to Caines, that did not happen because someone who was trusted by Thompson put illegal items into the Cornflakes boxes.

Her Honor, Magistrate Yasmine Clarke told the court that this case was based mainly on the law and the evidence. She said that the charges brought against the accused were all of strict liability that carried heavy penalties.

In relations to possession of cannabis to supply to another, Thompson was convicted and fined $5000.00 to be paid in 6 months or in default he would serve 12 months imprisonment. He was also found guilty for the offense of importation and ordered to pay $5000.00 in 12 months or serve 12 months at Her Majesty’s Prison. The charge of fraud was dismissed against him. He was convicted on the other two charges but no sentences were recorded against him.

The Magistrate told him to consider himself lucky.