(CHARLESTOWN NEVIS)- On the evening of Wednesday, December 3, 2014 the Department of Community Development of the Nevis Island Administration hosted its annual Christmas Tree Lighting at the Memorial Square in Charlestown under the patronage of Pastor Eric Maynard.

The ceremony began with the invocation, followed by the National Anthem.

Chairperson of the event, Pastor Ron Daniel, gave the opening remarks. He told the gathering that Christmas was that time of the year when the birth of Jesus Christ is celebrated. To this end he was of the view that believers should never hesitate to give him glory and to praise his holy name. Mr. Daniel highlighted that it was always a pleasure to see the young people doing meaningful things in the community and staying out of trouble.

Deputy Premier, Hon. Mark Brantley, also gave some remarks. Brantley claimed that he was pleased to be a part of such an occasion. He reminded the gathering that with all the fun and merriment planned for this Christmas, one must always remember to be his brother’s keeper. He also stated that Mr. Ken Evelyn should be highly commended for making the event possible. He continued, “It would be remise of me if I don’t make mention of Mr. Evelyn who continues to work tirelessly to make this event possible on a yearly basis”. In closing the Deputy Premier wished everyone a merry Christmas and a bright and prosperous new year.

Area representative, Hon. Robelto Hector, also gave brief remarks. He told those in attendance that they must use this Christmas season to celebrate with friends and family. Mr. Hector noted that the patron chosen for this year’s event could not have been a better choice. He stated, “I have known Pastor Maynard for my entire life and because of his service to the Charlestown community and Nevis by extension, our island is a better place”. Hon. Hector also urged Pastor Maynard to keep rendering his service to his country and any criticism that he may receive, he must to use it and to rise above the fray. In conclusion, he wished everyone a merry Christmas and a new year filled with joy.

Premier of Nevis, Hon Vance Amory gave a few brief remarks. Mr. Amory indicated to the audience that even though Christmas is a time for fun, one must also not forget the true meaning of Christmas. The Premier claimed that as we celebrate this Christmas season, in everything we do we ought to remember our Saviour who died for us.

Mr. Amory also noted that Mr. Ken Evelyn who continuously and religiously invests his time and money into the event year after year should be showered with praises. In closing, the Premier said we should all have fun but it must be done in moderation.

The patron, Pastor Eric Maynard, also addressed the audience. Mr. Maynard who is the founder and Pastor of the Shiloh Baptist Church located in Ramsbury said humorously that when he was contacted about being the patron for this year’s event he was tempted to turn down the offer. He said, “I was going to reject the offer, but when I thought about the wonderful people who gave me consideration I was unable to reject it”. Pastor Maynard also indicated that Christ has been wonderful to us as a people and we should try our best to be faithful to him. The patron also noted that we must seek to make this festive season crime free.

Entertainment for the event came in the form of a dance, playing of the steel pan, and the rendition of ‘Silent Night’ by Mr. Kisean Warner. The choir of the Methodist church also entertained the crowd with two Christmas carols.

The vote of thanks was given by Ms. Tracey Parris. 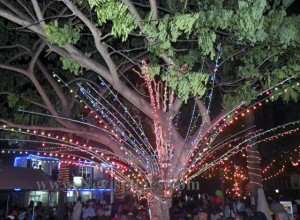