Citizens of St. Kitts and Nevis Urged To Change Deactivated Passports without Written Place of Birth to Avoid Problems at Ports Of Entry 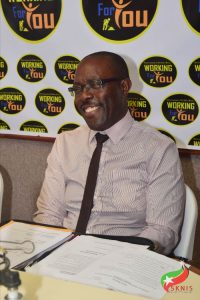 Basseterre, St. Kitts, August 8, 2019 (SKNIS): Citizens of St. Kitts and Nevis, who have not yet changed their passports without the written place of birth field are urgently asked to do so to avoid problems with immigration at ports of entry as those passports were deactivated in 2017 and are presently deemed illegal to travel with.

Speaking on the weekly government radio and television programme, “Working for You” on August 7, 2019, Senior Foreign Officer in the Ministry of Foreign Affairs, Michael Penny, said that the time had expired a long time ago for citizens to change those passports and that no one should be found travelling with them.

“In fact, they are supposed to lock you up if they find you with it,” said Mr. Penny while adding that Interpol has been notified and has been given the power to “seize it and they can detain you.”

Passports issued from 2010-2014 under the Dr. Denzil Douglas Administration excluded the written place of birth field.