Basseterre, St. Kitts, March 17, 2016 (RSCNPF): Commissioner of Police Mr. Ian M. Queeley and the members of the Police High Command inspected and took the traditional salute from Police Officers on Thursday (March 16) during his first Commissioner’s Parade as leader of the organization. 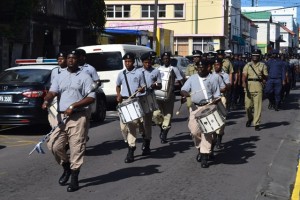 Five (5) platoons of officers representing Division ‘A’ (Basseterre police station and the departments based at Police Headquarters, Cayon, Frigate Bay, Stapleton and the Traffic Department), Division ‘B’ the outlying stations (Old Road, Sandy Point, St. Paul’s, Dieppe Bay and Tabernacle), the Tactical Units (SSU and Drug Unit) and the Recruits at the Police Training Centre participated in the parade. The parade was led by the Police Drum Corps, a community based youth outfit sponsored and led by the Police Service.

Commissioner Queeley said, “the Commissioner’s Parade provides a backdrop to showcase our drilling ability. Drills are the foundation of discipline and as we strive to bring back discipline to a high level this is but one medium. It also promotes a healthy sense of competition amongst the various divisions, and that builds “Esprit de Corps”. Commissioner Queeley added, “the parade also gives us, the High Command an opportunity to see how our Officers pay attention to the little things, like ensuring their uniform is inspection ready.”

A Commissioner’s Parade is planned for Nevis next week and at least once per quarter in both St. Kitts and Nevis