BASSETERRE, ST. KITTS, SEPTEMBER 12TH 2013 (CUOPM) – The Constituency Boundaries Commission, which submitted its Report to the Governor General, His Excellency Sir Edmund Lawrence has unanimously agreed to retain the 11 constituencies in St. Kitts and Nevis.

“It was unanimously agreed that we shall retain the 11 constituencies in St. Kitts and Nevis. Everybody agreed on that,” said the Hon. Marcella Liburd, a member, the five-person Commission appointed by the Governor General. 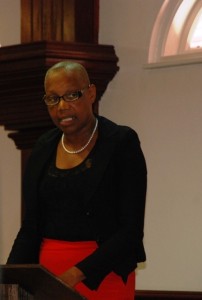 Speaking in the St. Kitts and Nevis National Assembly she pointed out that the Constitution states that all constituencies shall contain as near equal numbers of inhabitants as appears to the Constituency Boundaries Commission to be reasonable practicable but the commission may depart from this rule to such extent as it considers expedient to take account of the following factors, that is to say the requirement of rule 1 and the differences in the density of the populations in the respective islands of St. Christopher and Nevis; (b), the need to ensure adequate representation of the sparsely populated rural areas (c), the means of communication, (d), geographical feature and (e) existing administrative boundaries.

“We looked at the Census Report for 2011. We also looked at previous reports of Commissions and we also in accordance with Section 49 Subsection (3), set out the rules by which we would be guided in this Commission and we decided unlike previous times, when there were no consultations in 1983 and no consultation in 1988. In 1983, the Commission met for one hour and 15 minutes. One hour for St. Kitts and 15 minutes for Nevis. No consultation. We decided to consult with all the political parties and get from them, proposals as to how they would like to see the boundaries realign in St. Kitts and Nevis,” Ms. Liburd told lawmakers and the nation.

She said the Hon. Sam Condor and the Hon. Dr. Timothy Harris were invited individually to make proposals and recommendations to the Commission and each member of the Commission was also invited to make submissions.

Ms. Liburd said it was unanimously agreed by Commission members to seek legal advice on the use of the Preliminary Census report and the Motion of No Confidence.

“We did. we got the legal opinions back, we discussed them and the legal opinion was that the No Confidence Motion had nothing to do with the work of the Commission so we proceeded and that the Census Report could be use with some additions to it, by calling in some of the experts to fill any gaps and we did just that. We invited the statisticians from both St. Kitts and Nevis, the Director of Physical Planning and Environment and Mr. James Buchanan, a private land surveyor to give technical input to the Commission. They were asked questions to satisfy the difficulties with the Preliminary Report,” she disclosed.

She said the Constitution speaks to inhabitants and not voters as the Parliamentary Representative must look after all inhabitants in the Constituency and not just the people who vote.

Ms. Liburd disclosed that the Constituency Boundaries Commission looked at the population of St. Kitts and Nevis according to the Census and the total count was 46, 398 number of inhabitants. On St. Kitts there was 36, 983 inhabitants and on Nevis 11, 415.

St. Christopher 8 the Parish of St. Peters including Stapleton, Milligin, Fountain, Cedar Grove, John England, Parrays Village, Upper Monkey Hill, Lower Monkey Hill, New Road, Douglas Estate, CLICO, Ambassador Shore, Conaree, Needsmust, Canada and North Frigate Bay. This gave a total of 4, 335 inhabitants; bearing in mind that the average that we was said was 4, 372, so that was the closest.

St. Christopher 7 will include the Parish of St. Mary which comprises of Keys, Cayon, Ottley’s and Lodge; the parish of St. Mary will be part of the Parish of Christ Church mainly and also to be included is Phillip’s; 50% of the inhabitants of Lodge Ghaut, Boureaux and Molineux in all, that would give you a total of 4, 083, the Constituency will end South of the hospital road in Molineux.

St. Christopher 6 this would be Lodge Ghaut, Boureaux, Molineux, from Nicola Town, Christ Church, Mansion and Estridge as well as the parish of St. John and this will give you a total of 4, 179 inhabitants for this constituency; and the Parish of St. John includes Tabernacle, Stone Castle, Lynches, Lavington, Saddlers, Belle Vue, Harris’s, Parson’s, Pogson’s and Dieppe Bay.

St. Christopher 2 also remains unadjusted as the existing constituency #2 in the Census had 4, 549 inhabitants; again the number was pretty close to the average that we were looking for.

Nevis 9 as you know had some 5,000 inhabitants and the average was 3,008 or there about and so a total of 1, 357 inhabitants were removed from that constituency. These were from Pond Hill, Beach Road, Cole Hill, Burden Pasture, Morning Star and Church Ground. That constituency now consists of 3, 864 inhabitants.

Nevis 11 remains as it is at present because that constituency in the Census had 3, 819 inhabitants.